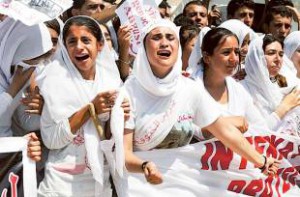 Locked inside a room where the only furniture was a bed, one 16-year-old learned to fear the sunset, because nightfall started the countdown to her next rape.

During the year she was held by Daesh, she spent her days dreading the smell of the Daesh fighter’s breath, the disgusting sounds he made and the pain he inflicted on her body. More than anything, she was tormented by the thought she might become pregnant with her rapist’s child.

It was the one thing she need not have worried about.

Soon after buying her, the fighter brought the teenage girl a round box containing four strips of pills, one of them coloured red.

“Every day, I had to swallow one in front of him. He gave me one box per month. When I ran out, he replaced it. When I was sold from one man to another, the box of pills came with me,” explained the girl, who learned only months later that she was being given birth control.

It is a particularly modern solution to a medieval injunction: According to an obscure ruling in Sharia, cited by Daesh, a man must ensure that the woman he enslaves is free of child before having intercourse with her.

To keep the sex trade running, the fighters have aggressively pushed birth control on their victims so they can continue the abuse unabated.

More than three dozen Yazidi women who recently escaped Daesh and who agreed to be interviewed for this article described the numerous methods the fighters used to avoid pregnancy, including oral and injectable contraception, and sometimes both.

In at least one case, a woman was forced to have an abortion in order to make her available for sex, and others were pressured to do so.

Some described how they knew they were about to be sold when they were driven to a hospital to give a urine sample to be tested for the hCG hormone, whose presence indicates pregnancy. They awaited their results with apprehension: A positive test would mean they were carrying their abuser’s child; a negative result would allow Daesh fighters to continue raping them.

The rules have not been universally followed, with many women describing being assaulted by men who were either ignorant of the injunction or defiant of it.

But overall, the methodical use of birth control during at least some of the women’s captivity explains what doctors caring for recent escapees observed: Of the more than 700 rape victims from the Yazidi ethnic group who have sought treatment so far at a United Nations-backed clinic in northern Iraq, just 5 per cent became pregnant during their enslavement, according to Dr Nagham Nawzat, the gynecologist carrying out the examinations.

It is a stunningly low figure given that the normal fertility rate for a young woman is between 20 per cent and 25 per cent in any given month, four to five times the rate that has been recorded so far, said Dr Nezar Ismet Taib, who heads the Ministry of Health Directorate in Dohuk, which oversees the clinic where the victims are being treated.

“We were expecting something much higher,” he said.

Sold over and over

The captured teenage girl, who agreed to be identified by her first initial, M., has the demeanour of a child and wears her hair in a bouncy ponytail. She was sold seven times.

When prospective buyers came to inquire about her, she overheard them asking for assurances that she was not pregnant, and her owner provided the box of birth control as proof.

That was not enough for the third man who bought her, she said. He quizzed her on the date of her last menstrual cycle and, unnerved by what he perceived as a delay, gave her a version of the so-called morning-after pill, causing her to start bleeding.

Even then, he seemed unsatisfied.

Finally he came into her room, closed the door and ordered her to lower her pants. The teenager feared she was about to be raped.

Instead he pulled out a syringe and gave her a shot on her upper thigh. It was a 150-milligram dose of Depo-Provera, an injectable contraceptive, a box of which she showed to a reporter.

“To make sure you don’t get pregnant,” she recalled him saying.

When he had finished, he pushed her back onto the bed and raped her for the first time.

Thousands of women and girls from the Yazidi minority remain captives of Daesh, after the group overran their ancestral homeland on Mount Sinjar on August 3, 2014. In the months since then, hundreds have managed to escape, returning to a community now living in tents in the plains of the yellow massif, hours from their former homes.

Many of the women interviewed for this article were initially reached through Yazidi community leaders, and gave their consent. All the underage rape victims who agreed to speak were interviewed alongside members of their family.

J., an 18 year old, said she had been sold to Daesh’s governor of Tal Afar, a city in northern Iraq.

“Each month, he made me get a shot. It was his assistant who took me to the hospital,” said J., who was interviewed alongside her mother, after escaping this year.

“On top of that he also gave me birth control pills. He told me, ‘We don’t want you to get pregnant,’” she said.

When she was sold to a more junior fighter in the Syrian city of Tal Barak, it was the man’s mother who escorted her to the hospital.

“She told me, ‘If you are pregnant, we are going to send you back,’” J. said. “They took me into the lab. There were machines that looked like centrifuges and other contraptions. They drew three vials of my blood. About 30 or 40 minutes later, they came back to say I wasn’t pregnant.”

The fighter’s mother triumphantly told her son that the 18 year old was not pregnant, validating his right to rape her, which he did repeatedly.

When that fighter tired of her, he gave her as a gift to his brother. Yet the brother did not take her back to have another blood test, forcing her to have sex without ascertaining whether she was carrying another man’s child.

Several other women reported a similar set of circumstances, including being given birth control by some of their owners but not by others.

However, the low pregnancy rate, say medical professionals, is evidence that the rules intended to avoid pregnancy were more likely to have been applied than not.

In his office in Dohuk’s Ministry of Health Directorate, Taib, the physician tasked with overseeing the treatment of the hundreds of victims, was initially puzzled by the low pregnancy rate.

In other conflicts where rape has been used as a weapon of war, it has led to waves of unwanted pregnancies — either because the attackers did not use birth control or, as was the case in the former Yugoslavia, because they purposefully tried to impregnate their victims. One medical study of 68 Croatian and Bosnian rape victims found that 29 had become pregnant.

With more than 700 cases of rape recorded so far, Taib’s Centre has treated only 35 pregnancies. He expected to see at least 140.

“Even higher than that, if you consider that these women had multiple partners and were raped every day over many months,” Taib said.

No signs of abortion

“I concluded that either they did an abortion before they came back or they used contraception,” Taib said. “And if there were abortions, then there would have been physical signs,” which would have been noted by the gynecologist treating the returnees, he said. “There were no signs.”

The prohibition surrounding pregnancy is perhaps the only instance when the codes that the extremists were applying lined up with the concerns of their victims, who dreaded carrying their rapists’ children.

Ahlam, a middle-aged woman who was kidnapped with her six children, said she had been not raped because she had been deemed unattractive. Because she spoke Arabic, Daesh used her as an interpreter. One day, she was asked to chaperone a group of young Yazidi women to the hospital in Tal Afar, where each woman was given 150 milligrams of Depo-Provera.

Over the months that followed, she said, she escorted in all around 30 victims to get the injection both in Tal Afar and later in the Iraqi city of Mosul. Twice she was asked to escort her own teenage daughter, who was raped by multiple fighters. She explained the conflicted feelings she had at the time.

“Daesh took our girls as slaves, only for sex,” Ahlam said, but the insistence on birth control brought some relief. “No one wants to carry the child of their enemy.”

Others described how the fighters so opposed pregnancy that some tried to force young women to abort.

Abdal Ali said his sister, 20, was in her second trimester at the time of her capture in 2014. Still, one commander so urgently wanted her as his slave that he tried to end the pregnancy by giving her pills that would cause her to miscarry.

“She hid them under her tongue, and then when they weren’t looking, she spit them out,” said Ali, who related the story on behalf of his sister because she is undergoing medical treatment abroad for the injuries she suffered. “They wanted to get rid of the child so that they could use the woman.”

A 20 year old, who asked to be identified only as H., began to feel nauseated soon after her abduction. “The smell of rice made me gag,” she said.

Already pregnant at the time of her capture, she considered herself one of the fortunate ones. For almost two months, H. was moved from location to location and held in locked rooms, but she was spared the abuse that was by then befalling most of the young women held alongside her.

Despite being repeatedly forced to give a urine sample and always testing positive, she, too, was eventually picked.

Her owner took her to a house, shared by another couple. When the couple was present, he did not approach her, suggesting he knew it was illegal. Only when the couple left did he forcibly have sex with her, and when he did he appeared drugged.

“I was telling him: ‘I’m pregnant. In your book it says that you can’t do this.’ He had bloodshot eyes. He acted like he was high,” she said.

Eventually he drove her to a hospital with the aim of making her have an abortion, and flew into a rage when she refused the surgery, repeatedly punching her in the stomach.

Even so, his behaviour suggested he was ashamed: He never told the doctors that he wanted H. to abort, instead imploring her to ask for the procedure herself.

When he drove her home, she waited until he left and then threw herself over the property’s wall. “My knees were bleeding. I was dizzy. I almost couldn’t walk,” she said.

Weeks later, with the help of smugglers hired by her family, she was spirited out of Daesh territory. Her belly was sticking so far out that she could no longer see her toes when she finally crossed to safety. Her first child, a healthy baby boy, was born two months later.