You are here: Home / MidEastGulf / Daesh publicly executes 18 in Palmyra 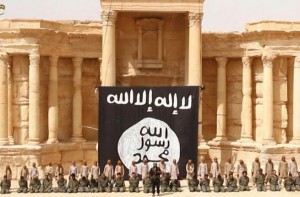 The Syrian Observatory for Human Rights reported the incident Monday, saying the victims were suspected of either cooperating with the Syrian military or serving in its ranks.

In mid-May, IS forces seized Tadmur and the adjacent Palmyra ruins, located in Homs province, executing more than 200 civilians and regime troops later in the month.

Khalid al-Asaad, 82, a renowned scholar and the director general of the Palmyra Directorate of Antiquities and Museums, was publicly beheaded by the militants amid the ruins in August.

Much as they have in Mosul and other captured cities in Iraq, IS militants — citing the charge of “idolatry” — have systematically demolished several ancient temples, arches and other antiquities in Palmyra that date back thousands of years.

In June, IS was reported to have planted several explosive devices amid the archaeological site, and in late October, activists said the group detonated explosives on three prisoners strapped to columns in Palmyra — the first time such a method had been utilized by the militants.

Monday’s executions came as IS forces face off with the Syrian military in western Homs province, specifically around the town of Maheen, which the militants seized from pro-government forces early last month.