The Daesh jihadist group behind last month’s explosions in Brussels had plans to target the 2016 UEFA European Championship in France, media reported Monday. 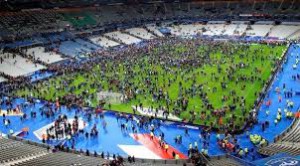 On March 22, a series of blasts hit the Brussels Airport and a metro station located near the EU institutions’ offices in the center of the city, killing 35 people. Daesh, which is outlawed in many countries, including Russia, claimed responsibility for the attacks.
Mohammed Abrini, who was allegedly one of those behind the Brussels attacks, told investigators that the terrorists’ key target was not Brussels but the Euro 2016 Championship, whichis due to be held across France from June 10 to July 10, the French Liberation newspaper reported, citing an anonymous source.The terrorists’ decision to hit Brussels was unexpected and “hasty,” according to the source.

The confessions are yet to be proved by police and investigators, the newspaper noted.

The Daesh claimed also responsibility for the November 13 Paris attacks, which killed 130 people and injured over 350 others, raising global anti-terrorism concern and making Europe reinforce its safety and security measures.