You are here: Home / Senza categoria / Daesh ‘neither Islamic nor state’ 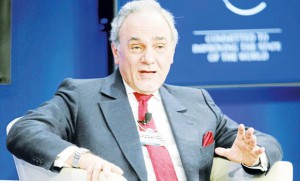 The problem of Daesh will last as long as the Syrian crisis, Prince Turki Al-Faisal, chairman of King Faisal Foundation, told a gathering of Arab ambassadors and British ministers in London.
Speaking at British Parliament, he said Daesh is just an organization and not a state, which has no relation with Islam and Muslims.
He said Daesh came about as a result of the ongoing Syrian crisis.
Prince Turki said calling Daesh an Islamic state is an insult to all Muslims. “While media played a vital role in doing a lot of propaganda for Daesh, there were some attempts to link this organization with Islam.”
He said Saudi Arabia still suffers from Saudi youths joining battles in Syria and Iraq as a result of Daesh’s propaganda. This propaganda describes Daesh as a pure Islamic society. “All security agencies must join efforts to combat Daesh trying to recruit youth via social media.”
He said Saudi Arabia would not accept any solution which allows Bashar Assad to stay in power as this kind of arrangement is an insult to 350,000 Syrians who died in the war.
“There is a difference between Saudi and Russian positions in dealing with the Syrian crisis. Russians describe Assad as someone working against terrorism, while the Kingdom considers him a terrorist.”
He said without Assad quitting, all international political and military efforts to end the crisis will fail.
Saudi Arabia would not change the political structure in Syria but it is important to punish all Syrian officials involved in killing their people, he said.
Criticizing Iran’s interference in the domestic affairs of Arab countries, Prince Turki said Tehran supports Assad’s crimes. “However, Iraqi people took out large protests in cities against Iranian interference in the domestic affairs of Iraq.”