You are here: Home / Europe / Daesh militants are posing as refugees to plot attacks in Europe warns German official 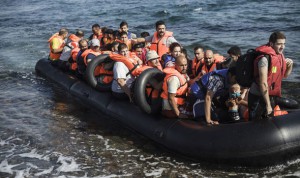 As the number of refugees entering Germany this year reached 950,000 police chief Hans-Georg Maasen said some men arriving as refugees have fought with ISIS and are planning a “combat mission” once they land in Europe.

Authorities are aware of 7,900 Islamic radicals in Germany advocating violence and attempting to recruit refugees, according to Mr Maasen.

He said his office receive one or two “fairly concrete tips” a week of planned terrorist activity, calling ISIS extremists “combat-hardened professionals” who are more dangerous than those from al-Qaida.

But Mr Maasen said the refugee influx is not systematically used by extremists to sneak ISIS militants into Europe.

Günther Oettinger branded Germany’s asylum policy as a “magnet” for refugees and called for a drastic U-turn on how to deal with the crisis.

He said: “An amendment to the constitution would be necessary to change the asylum law.

“As long as this is not addressed, there is really only one alternative: billions of aid for the refugee camps in Turkey and other countries.”

German interior minister Thomas de Maiziere called for the EU to impose a limit on how many refugees should be allowed into Europe as his country struggles to cope with the surging influx.

Mr de Maiziere demanded Europe to “commit itself to a final generous intake of refugees, one that is appropriate to the suffering of refugees”.

Stricter security at borders has been introduced across Europe in the wake of the Paris attacks that killed 130 people after it emerged at least two of the terrorists posed as refugees to get into Europe.

A fake Syrian passport was found near the body of a suicide bomber who detonated his suicide vest near the Stade de France on November 13.

French and Greek officials confirmed the bomber’s fingerprints matched those of a man who had arrived on European shores on October 3 alongside desperate refugees who had crossed over from Turkey.

The revelation has intensified fears that ISIS extremists are passing themselves off as asylum seekers to get into the EU.

Fraudulent Syrian passports are regularly used on the migratory route from Turkey through Europe, with German officials estimating nearly a third of asylum seekers have falsely claimed they were Syria this year.

Syrian passports have become particularly valuable as Balkan countries said they would only open their borders to people fleeing war-torn countries such as Syria, Iraq and Afghanistan.

Migrants from other countries such as Iran, Pakistan and Somalia have not been allowed to continue their journey across Europe, prompting protests on the Greek-Macedonian border.

Clashes between police and refugees stranded at the Greek-Macedonian border have continued to escalate, with hundreds of migrants trying to force their way past police and army into Macedonia.