You are here: Home / MidEastGulf / Daesh militant killed in shootout in Saudi Arabia 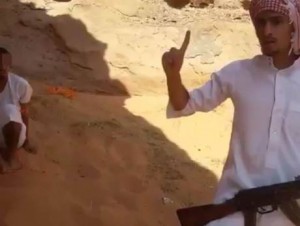 Police in Saudi Arabia have killed one of the two brothers who had gunned down their cousin, two civilians and a traffic policeman in the northwest of the kingdom. The second brother was arrested following a shootout, sources told Saudi news site Sabq.

The two masked assailants shot the two Saudi civilians at the police station and the traffic policeman in Al Shamli, in the Hail region, on Thursday. One of them was shouting slogans supporting Daesh during the attacks, Sabq said.

According to reports in Saudi Arabia, one of the attackers filmed his brother killing a cousin who worked in the security services and posted the clip on social media.

The brother who shot the video clip was killed by police during the massive hunt launched following the murderous attacks.

The second brother was wounded during the fire exchange with the police and transported to a local hospital.

Saudi news site Sabq said that one policeman was killed and that the head of the police station in Hail was injured in the shootout, and had to be taken to King Khalid Hospital for treatment.

Reports in Saudi Arabia said that the killer was a 19-year-old unemployed citizen who had not completed high school. He had recently adopted the Daesh ideology after spending long hours surfing the internet.

Al Arabiya channel quoted the father, Radhi Ayash Al Enezi, as saying his sons were 22 and 16.

“I could not believe my eyes when I watched the clip of Saad [the older brother] killing his cousin,” he said. “My two sons and their cousin, the son of my brother, were together on Eid day and they were exchanging Eid wishes with all. I never had doubts or suspicions about my son. He never travelled at all and he never went beyond our house in the village located 150 kilometres from the city of Hail.”

He added that he never saw anything suspicious about his son’s behaviour and his inclinations towards Daesh ideology.

“I often saw him glued to the computer and I thought he was watching some obscene clips, so I sat with him and advised him. I offered to assist him find a job, but he declined the option, saying he did not wish to work. He told me there was no need to work to get money since people end up dying anyway. I told him I could help him get married and I offered to pay for all the expenses, but again, he declined and said he would rather postpone the idea,” he said.

The father added that the two brothers and their cousin often went out together.

“My nephew, 21 was an orphan and he was brought up in our house alongside Saad and Abdul Aziz,” he said. “The victim was last month enrolled in a centre as a soldier and he had come home to spend the Eid holidays with the family.”