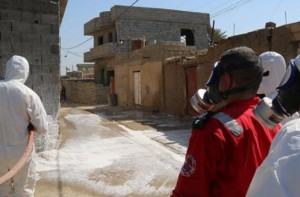 The report did not disclose whether there were any casualties. Russia’s RIA Novosti, however, cited a military source as saying that “a number of soldiers were choking.”

Last January, the Syrian army managed to drive back Daesh from several villages near the airbase. Operations are still underway, however, to totally remove them.

Mustard gas can form large blisters on exposed skin and in the respiratory tract, severely complicating breathing. It is banned under the Chemical Weapons Convention.

Daesh earlier claimed that it had carried out an attack on Jufrah Village near the airbase. The report said two bombers rammed their explosives-laden vehicles into the army defenses and killed at least ten people.

Daesh, which is notorious for its barbarity, heinous atrocities and sacrilegious acts, has been accused of committing gross human rights violations and war crimes in the areas it has overrun, particularly in Syria and Iraq. The group has used chemical weapons both in both countries.

Back in March, local Iraqi governor Najmuddin Kareem told Reuters that the group had used“poisonous substances” during an attack on the village of Taza, in northern Iraq. More than 40 people suffered from partial chocking and skin irritation after the attack.

On August 21, 2013, a chemical weapon was used in the Ghouta suburb of Damascus. Hundreds of people died in the attack. According to reports, the rockets used in the assault were handmade and contained sarin.

A report by the Syrian-American Medical Society said Daesh has carried out more than 160 attacks involving “poisonous or asphyxiating agents, such as sarin, chlorine, and mustard gas” since the beginning of the Syrian conflict in 2011. At least 1,491 people have been killed in the chemical attacks.

The so-called Syrian Observatory for Human Rights says at least 270,000 people have been killed in war-ravaged Syria; however, some reports put the death toll as high as 470,000.