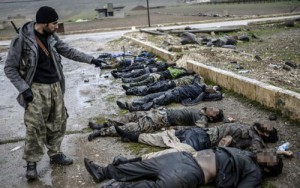 Daesh killed more than 300 Iraqi former police three weeks ago and buried them in a mass grave near the town of Hammam Al-Alil south of Mosul, Human Rights Watch (HRW) said today.

A Reuters reporter visited the site of the mass grave, where residents said the ultra-hardline militants buried victims who had been shot or beheaded. The residents said they believed up to 200 people were killed in the weeks before Daesh withdrew from the town.

HRW said some of the former policemen were separated from a group of about 2,000 people from nearby villages and towns who were forced to march alongside the militants last month as they retreated north to Mosul and the town of Tal Afar.

It quoted a labourer who said he saw Daesh fighters drive four large trucks carrying 100 to 125 men, some of whom he recognised as former policemen, past an agricultural college close to the site which was to become the mass grave.

Minutes later, he heard automatic gunfire and cries of distress, he said. The next night, on 29 October, a similar scene was repeated, with between 130 to 145 men, he told HRW.

Another witness, a resident of Hammam Al-Alil, said he heard automatic gunfire in the area for approximately seven minutes, three nights in a row.

“This is another piece of evidence of the horrific mass murder by ISIS [Daesh] of former law enforcement officers in and around Mosul,” said Joe Stork, deputy Middle East director at Human Rights Watch. “ISIS should be held accountable for these crimes against humanity.”