You are here: Home / MidEastGulf / Daesh kidnaps women and children in Syria’s Sweida 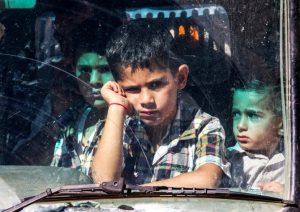 Daesh group kidnapped dozens of Druze women and children when it attacked their villages last week in Syria’s southern province of Sweida, a monitor said Monday according to arabnews.com.

More than 250 people were killed on Wednesday when Daesh carried out a string of suicide attacks and shootings in the provincial capital Sweida and villages to the north and east.

“At least 36 Druze women and children were abducted after the attacks,” said the Syrian Observatory for Human Rights, a Britain-based monitor with a network of sources inside Syria.

Four of the women had since managed to escape and another two had died, said Observatory chief Rami Abdel Rahman.

Another 17 men from the areas targeted by Daesh were still unaccounted for, but it was unclear if they were also kidnapped, he told AFP.

Both the Observatory and Syrian news outlet Sweida24 said 20 women and 16 children had been kidnapped.

Daesh has not claimed the kidnappings, and no details on them could be found on its propaganda channels.

Daesh declared a self-styled Islamic “caliphate” in 2014 across Syria and Iraq, but has since lost most of that territory.

It still holds small, isolated areas of Syria’s remote desert, which includes northeastern parts of Sweida, as well as pockets in the adjacent province of Daraa and further east near the border with Iraq.
Backed by Russia, Syrian troops have been waging an assault on an Daesh-held pocket of Daraa for more than a week.

Sweida, which is mostly held by the government and populated by the secretive Druze minority, has been relatively insulated from the violence of Syria’s seven-year war.

Last week’s attacks were the bloodiest ever in the province and among the deadliest waged by Daesh in Syria.