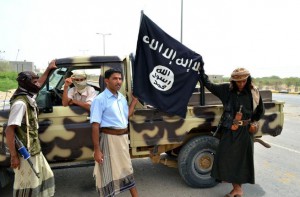 Daesh (ISIS) has claimed responsibility for the series of attacks that killed at least 31 people in Yemen’s rebel-held capital Wednesday, AFP reported.

A statement posted online said Daesh fighters had detonated four car bombs in Sanaa “as revenge for the Muslims against the Houthi apostates,” according to AFP. The explosions targeted three mosques in the city and the Shiite rebels’ headquarters.

The attacks come on the second day of UN-sponsored talks between Houthi delegation and Yemen’s exiled government in Geneva with the goal of brokering a ceasefire during Ramadan.

Houthi rebels took over the capital September. Fugitive President Abd-Rabbu Mansour Hadi fled to Aden before attacks on the southern port city pushed him to flee the country.