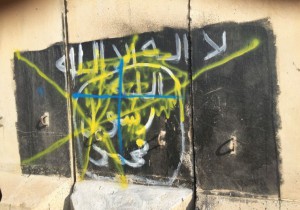 It has not been a good week for the Islamic State. Though far from defeated, the group is nevertheless being harried across several fronts, experiencing significant losses in Syria as well as Iraq — Iraqi Prime Minister Haider al-Abadi visited Ramadi today to highlight the Iraqi army’s victory there. The Islamic State’s overstretched forces are contending with multiple offensives against them and continuous, punishing airstrikes.

In northern Syria, the Kurdish-dominated Syrian Democratic Forces are driving their offensive onward, crossing the Euphrates River in numbers after seizing the Tishrin dam over the weekend. They are now advancing westward toward the Islamic State-held town of Manbij in northern Aleppo. The success of the offensive has thrown Islamic State elements in the area into disarray. The Syrian Democratic Forces are now in a position to threaten the Islamic State’s supply lines, even as the rebels prepare for another critical offensive to push the militant group out of its self-declared capital of Raqqa.

Syrian government forces, with backing from foreign militias and the Russian air force, have also been pushing hard into Islamic State territory. The Syrian army is expanding its control over terrain close to the formerly besieged Kweiris air base, where a number of Syrian loyalists held position for years against persistent Islamic State attacks. On Dec. 29 the Syrian government also reportedly took back the strategic town of Maheen, 25 kilometers (16 miles) from the vital M5 highway controlled by the Islamic State.

The Islamic State is also engaged in pitched battles against rebel forces — specifically rebels from the Marea operations room (a grouping of different rebel factions that coordinate their actions together) — advancing eastward near the Turkish border in northern Aleppo. Over the last month, these rebels have gradually retaken several villages and defensive positions from the Islamic State, though extremist forces managed to reverse some gains with sporadic counterattacks.