You are here: Home / Mediterranean / Daesh is preparing a backup capital in Libya 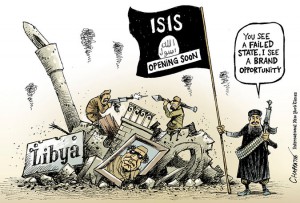 With ISIS’s de-facto capital of Raqqa the target of international strikes, the terrorist organization is making backup plans in the Libyan city of Sirte should its Syrian hub fall.

While ISIS (also known as the Islamic State) has other affiliates throughout Africa and the Middle East that have pledged their allegiance to its leader, Abu Bakr al-Baghdadi, the group’s branch in Sirte is the only one that ISIS central leadership directly controls.The Wall Street Journal reports that ISIS leaders in Libya have reportedly adopted a slogan that reflects Sirte’s heightened profile within the jihadist organization: “Sirte will be no less than Raqqa.” […]

ISIS’s influence in Sirte has been growing over the past year, as it has evolved into what The Times describes as an “actively managed colony” of the central group.

The growth has been swift — the Libya affiliate has gone from 200 fighters to about 5,000 since ISIS announced its branch there, The Journal reports. (The Times reports that Western put that estimate at 2,000 fighters.)

The lack of a functioning government in Libya and its oil rich resources make it fertile ground for the terrorist group.

“We don’t have a real state. We have a fragmented government. Every day we delay on a political deal, it is a golden opportunity for Islamic State to grow,”Fathi Ali Bashaagha, a politician from Misrata, Libya, told The Wall Street Journal.