You are here: Home / West Asia / Daesh is moving in on Taliban turf

The past year hasn’t been kind to the Afghan security forces, who have suffered record casualties after taking the lead in the fighting. 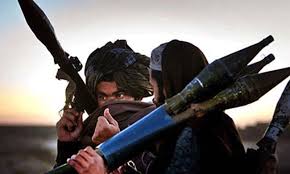 With Daesh (the self-proclaimed Islamic State of Iraq and the Levant) dominating headlines in 2015, Afghanistan went back to being America’s forgotten war. That made it easier to ignore the fact that the Taliban now controls more territory than at any time since 2001.

With the United States and Nato troops ending their combat mission in the country, the Taliban is attacking Afghanistan’s security personnel on multiple fronts. And while the US-trained Afghan troops are in many areas fighting harder than in Iraq, the result has nevertheless been a string of defeats and steady militant gains.

To make matters worse, Daesh has also steadily expanded its presence in Afghanistan, battling it out with the Taliban in the country’s east, while importing some of the brutal tactics it honed in Iraq and Syria.

The past year hasn’t been kind to the Afghan security forces, who have suffered record casualties after taking the lead in the fighting. The Taliban also quickly rushed in to take advantage of the space created by Nato closing hundreds of combat outposts across the country, clawing back hard-won ground in the country’s south, north and east.

After the dramatic drawdown in the number of US and Nato troops, the Taliban were bound to seize ground as those forces withdrew. “When you go from 100,000 troops down to about 10,000, there should be no surprise that there’s a consequence in the security situation,” said Andrew Wilder of the US Institute of Peace.

The group’s recent gains prompted the commander of US and Nato forces in Afghanistan, US Army General John Campbell, to consider asking for yet another extension to the American mission. The current plan is to draw down to about 5,500 troops by the end of 2016, but Campbell wants to keep as many of the 9,800 US troops currently deployed for as long as possible. Nato allies, which currently contribute another 4,000 troops, have yet to announce any long-term plan for the country.

Many of the Taliban’s gains have been in the south and east. In southern Helmand province, the insurgents have seized control of the districts of Musa Qala and Nawzad and are threatening Sangin — the scene of so much bloody fighting by American and British forces over the past decade.

Taliban militants are even squeezing Helmand’s provincial capital of Lashkar Gah. To the north of the country, the Taliban scored a major victory in September when they captured the city of Kunduz in Kunduz province. Although Afghan forces retook the city in mid-October, the fall of the city marked a major psychological setback for the Kabul government, underscoring the fragile security situation in major cities once considered safe.

It also dealt a black eye to the US, which has been struggling with the aftermath of the carnage caused by an American AC-130 gunship mistakenly attacking a Doctors Without Borders hospital in the city. The aid group estimates that at least 42 staffers and patients were killed and has called the incident a war crime.

Still, it’s far too soon to conclude that the Taliban will be able to keep control of all of the territory it has taken. Local politics is fluid and government forces, backed by US airpower, have shown an ability to hit back hard. That makes one thing clear: This year will be another bloody one in a country all too accustomed to war.