You are here: Home / West Asia / Daesh influence on the rise in Pakistan 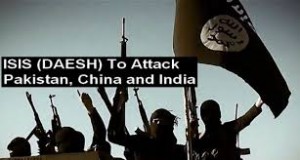 The host of the programme ‘Aaj Shahzeb Khanzada Kay Saath’, while presenting his analysis said on Tuesday that the influence of Daesh is on the increase in Pakistan.

The activists of Lashkar-e-Jhangvi are followed by Jamaatud Dawa in joining Daesh after being impressed by its message. Our civil and military leadership had been refusing the existence of Daesh in the country, but the arrest of nine activists of Jamaatud Dawa in an operation, who had joined Daesh should be an eye-opener for the government.

Shahzeb Khanzada said the Interior Minister Chaudhry Nisar had been repeatedly denying the existence of Daesh in Pakistan. It was questioned, when the government had prepared a list of banned organisations and had included in it the name of Daesh, why that name had been mentioned in the list when the Daesh did not exist in the country at all.

Shahzeb Khanzada said the existence of Daesh was proved in Sialkot as two Pakistanis were arrested in Turkey for allegedly having links with the Daesh. Sources in the Punjab police said some families of Lahore had left Pakistan after being impressed by Daesh. He said there are not only sympathisers but also activists of Daesh in Pakistan, who have shown allegiance to Abu Bakr Albaghdadi.

Shahzeb Khanzada said the Shahbaz Sharif administration is pondering over the gang rape case of a girl student of Lahore. The pressure on the Punjab government is increasing to bring the perpetrators of the crime to justice.

Shahzeb Khanzada further said in his analysis that it now almost seven months since the local government elections were held in Khyber Pakhtunkhwa, but the elected representatives have not been provided the offices, staff and funds. The government of Pakistan Tehreek-e-Insaf, against its claims, is appearing to have failed in transferring the authority to elected representatives. Shahzeb Khanzada said Imran Khan inaugurated the Shaukat Khanum Cancer Hospital. There may be differences with the political thinking of Imran Khan but this aspect of his service to humanity could not be denied.

The Punjab Law Minister, Rana Sanaullah said the Punjab government has not closed its eyes over terror activities. The Anti-terrorist Force is engaged in taking actions against terrorists. It is a proof of our alertness that the terror activities of Daesh were apprehended well before they could indulge in any terror activity. He said the accused in the rape case of a girl student of Lahore were arrested the very first day while the main accused was be arrested within 48 hours the same day. No one would be given any relaxation in the case, while there would be no challan against any innocent man in the case.

He pointed out that a woman self-immolated for non-registration of an FIR in Muzaffargarh. The chief minister had reached there the very next day and a challan has been presented in the court after completion of the inquiry. Rana Sanaullah said the government sent a Challan in the Anti-terrorist Court in the case of Kanju, but the complainant party accepted money, made patch-up and reverted from his statement. The government has, however, got cases registered against the witnesses who had backed out.

Rana Sanaullah said the Forensic Laboratory is capable of meeting the requirements of the whole country. He said Salman Akram Raja, who is giving details of the Rawalpindi rape case but why the court did not order inquiry into the case. “Had we been assigned the duty of inquiry, we would have dealt with the culprits severely.