You are here: Home / Mediterranean / Daesh in Egypt threatens attack on Israel 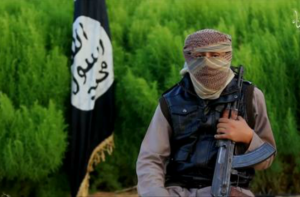 Daesh released a new video threatening to attack Israel, but did not reveal when it would take place.

“The video is focused on the war against the Egyptian military. The threat to Israel comes at the end, where he says that they will reach the Jews,” Rafael Green, director of the Jihad and Terrorism Threat Monitor of MEMRI (the Middle East Media Research Institute), told The Jerusalem Post on Wednesday.

The speaker expressed the terrorist group’s desire to attack Israel at an unspecified time, he said, quoting the well-known hadith:

“Judgment Day will not come until you fight the Jews and kill them. The Jews will hide behind stones and trees, and the stones and trees will call: O Muslim, o servant of Allah, there is a Jew behind me, come and kill him – except for the gharqad tree, which is the tree of the Jews.”

Therefore, this video should be taken seriously, but needs to be put into proportion, said Green.

The 14 minute video titled “And Then They Will Be Vanquished,” is a response to the Egyptian army’s recently launched Operation Martyr’s Right, noted the MEMRI report.

The speaker is a masked gunman who urges Egyptian soldiers to repent or be killed for attacking extremists in Sinai. He claimed that the army is trying to push out the local population in order to defend Israel.

The speaker warns Israel, saying that the extremists have not forgotten it in spite of their current focus on the war against the Egyptian government. He vows that his group will resume its attacks on Israel “soon.”

He also vows that Daesh will lead the caliphate which will “rise up and uproot you [the Jews].”

“He warns them that the mujahideen will penetrate deep into the territory of the ‘tyrants’ hinting at planned operations within Egypt itself, rather than in the Sinai Peninsula,” notes the report.

“Indeed, this apostate army has failed to carry out the mission it was tasked with, and was embarrassed in front of the public and in front of its masters,” he declares.

These messages were spoken as footage of civilians allegedly killed by the Egyptian army and blown up tanks and dead Egyptian soldier were shown.

The speaker vows that his group will raise its flag over the Cairo Tower, a famous Cairo landmark.