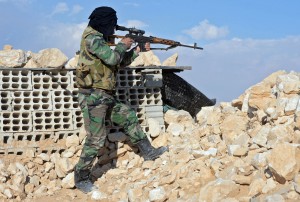 Daesh, also known as ISIL/ISIS, not only has great diversity among its fighters, hailing from over 80 different countries, but also a wide collection of arms and military equipment manufactured around the world.

Terrorists were seen using weapons not only from different time periods, but also from different countries. It’s not uncommon to see Deash fighters using old Soviet AK-rifles in conjunction with US-made M16 assault rifles. Sputnik made a list of the most common small arms used by Deash terrorists.

The AK-47 is one of the most widely used models of assault rifles in the world, and the Middle East isn’t an exception. When Daesh took over large parts of Syria, terrorists found many Soviet and Russian-made rifles in arms depots belonging to the Syrian Army.

After defeating Iraqi militia and Syrian rebels, Deash captured their US-made weapons. Furthermore, some Syrian rebels, previously supported and trained by the US military, joined the ranks of terrorists, while many others deserted, leaving their weapons on the battlefield for Daesh to pick up.1

A 9-mm submachine gun of German-design is among the most widely used submachine guns in the world, adopted by 40 nations, as well as numerous law-enforcement and security organizations. Using various illegal routes, a large number of MP5 submachine guns ended up in Syria and Iraq, where they became popular weapons among Daesh.

A semi-automatic rifle produced by the Belgian manufacturer Fabrique Nationale de Herstal (FN) was widely used by most NATO countries during the Cold War, with the exception of the United States, to the point that the rifle was nicknamed “the right arm of the Free World.” Due to its popularity and global use, it was also easy for terrorists to get their hands on the FN FAL.

A Soviet-designed light machine gun, designed by none other than Mikhail Kalashnikov in the late 1950s, is the perfect weapon that Daesh uses for portable firepower. The machine gun has been widely used on battlefields across the Middle East. Daesh picked up many machine guns from Syrian arms depots when they overran the large part of the country.

The semi-automatic Dragunov sniper rifle is another Soviet-made weapon popular among Daesh fighters. Used in over 30 countries officially, including neighboring Iran and Iraq, it’s pretty easy to understand how the old Soviet marksman rifle ended up in the hands of terrorists.