You are here: Home / MidEastGulf / Daesh group executes 12 of its own fighters for desertion in Iraq 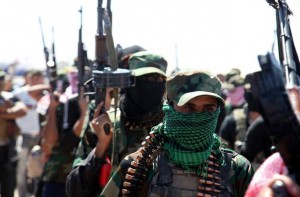 The Daesh militant group has reportedly executed a dozen of its own members in Iraq’s embattled western province of Anbar on charges of fleeing the battlefield.

The source added that the slain militants were accused of escaping clashes with Iraqi government forces in the province.

On January 26, Jabbar al-Mamouri, a commander of the pro-government Popular Mobilization units, said Daesh militants had killed four militant commanders along with three other members of the group by firing squad in Hawijah district, located about 282 kilometers (175 miles) north of the capital, Baghdad.

The slain extremists were accused of fleeing the clashes with government forces in the predominantly Sunni village of Tal Kusaiba, situated some 35 kilometers (20 miles) east of Salahuddin’s provincial capital city of Tikrit.

The executions came only two days after Daesh killed three of its own commanders in Iraq’s northern province of Nineveh after the militants sought to break away from the extremist outfit and escape the city of Mosul, located some 400 kilometers (250 miles) north of Baghdad.

Gruesome violence has plagued the northern and western parts of Iraq ever since Daesh militants launched an offensive in June 2014 and took control of portions of Iraqi territory.

The militants have been committing heinous crimes against all ethnic and religious communities in Iraq, including Shias, Sunnis, Kurds, Christians and others.