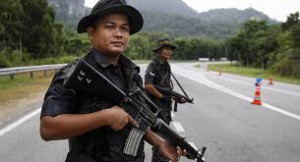 Attempts by Daesh militants to spread their ideology among Muslims in the volatile provinces of southern Thailand have failed.

“As of now there is no evidence that they have managed to create a unit like the freedom fighters in the south (of Thailand). It remains just an idea,” said an expert on southern Thailand affairs, Prof Dr Jaran Maluleem.

He told Bernama that one reason for the failure to win hearts and minds was revulsion for the atrocities that Daesh had committed.

Furthermore, the struggle of the Thai Muslims was very much localised and was not religious in nature, Jaran said.

He said that a key player in the recruitment drive was a “religious figure” who had been giving talks and sermons to propagate the teachings of the terrorist group.

Jaran added: “I was informed that he had been openly saying that we should be praying for IS (Daesh) to fight back (against Western imperialism). He wanted to incite people into supporting (Daesh).

“He had also been appearing in a programme of a television station in southern Thailand.”

Jaran said that Daesh attracted many people at first, but as the group committed endless attrocities, especially against civilians, its influence began to wane. “The Muslims in the south just could not accept the violence.”

Jaran, who was advisor on Muslim affairs to former Thai prime minister Thaksin Shinawatra, was interviewed after he gave a talk at a seminar on “Terror, from Paris to Jakarta” at the university.

After the Jakarta attack, which was blamed on the local affiliate of Daesh called “Katibah Nusantara”, the Thai authorities were said to fear that the southern provinces could be a breeding ground for the terrorist group.

Their concern grew with a report alleging that three people with suspected links to Daesh met religious leaders in Narathiwat late last year.

Prime Minister Gen Prayut Chan-o-cha was quoted in the local media as saying that he had asked the authorities to follow up on the matter.

According to the local media, intelligence sources identified the three suspects as an Indonesian, a Malaysian and a Singaporean who handed out donations to a local mosque and asked that students be taught about Daesh.

Although Daesh had failed in the southern provinces, Jaran said he shared the worry that the terrorists won’t stop trying to push their twisted ideology in Indonesia, Malaysia, Thailand and Brunei.