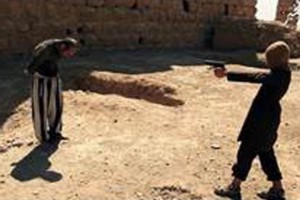 Daesh [ISIS] has reportedly executed three of its own commanders in Iraq’s embattled northern province of Nineveh after the latter sought to break away and desert the militant organization.

An informed source, speaking on condition of anonymity, said Daesh killed the fellow extremists on the grounds that they wanted to desert the group and had tried to escape the city of Mosul, located some 400 kilometers (250 miles) north of the capital, Baghdad, English-language online newspaper Iraqi News reported.

The source added that the executions were carried out by firing squad and in front of a crowd of onlookers in the center of Mosul.

On October 10, 2015, Daesh killed 50 fellow extremists in the western city of Khan al-Baghdadi, situated about 180 kilometers (110 miles) northwest of Baghdad, after accusing them of espionage and passing confidential information to Iraqi security personnel.

The development came on the same day as Daesh beheaded ten fellows publicly in the town of Hawijah, located about 282 kilometers (175 miles) north of the capital, on the ground that they had collaborated with government forces and leaked information about militant commanders.

Daesh members later took away the bodies of the slain militants with them to an unknown location.

Gruesome violence has plagued the northern and western parts of Iraq ever since Daesh launched an offensive in June 2014, and took control of portions of Iraqi territory.

The militants have been committing vicious crimes against all ethnic and religious communities in Iraq, including Shias, Sunnis, Kurds and Christians.

The Iraqi army and fighters from Popular Mobilization Units are engaged in joint military operations to win back militant-held regions.