You are here: Home / Mediterranean / Daesh entrenches in Sirte 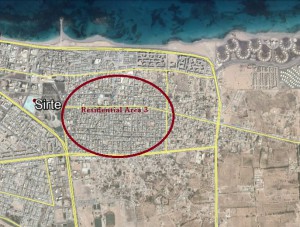 Even as foreign powers step up pressure against Islamic State in Syria and Iraq, the militant group has expanded in Libya and established a new base close to Europe where it can generate oil revenue and plot terror attacks.

Since announcing its presence in February in Sirte, the city on Libya’s Mediterranean coast has become the first that the militant group governs outside of Syria and Iraq. Its presence there has grown over the past year from 200 eager fighters to a roughly 5,000-strong contingent which includes administrators and financiers, according to estimates by Libyan intelligence officials, residents and activists in the area.

The group has exploited the deep divisions in Libya, which has two rival governments, to create this new stronghold of violent religious extremism just across the Mediterranean Sea from Italy. Along the way, they scored a string of victories—defeating one of the strongest fighting forces in the country and swiftly crushing a local popular revolt.

Tunisia closed its border with Libya for 15 days on Wednesday, the day after Islamic State claimed responsibility for a suicide bombing on a bus in the capital Tunis that killed 12 presidential guards.

Tunisia is also building a security wall along a third of that border to stem the flow of extremists between the countries. Two previous attacks in Tunisia this year that killed dozens of tourists were carried out by gunmen the government said were trained by Islamic State in Libya, which has recruited hundreds of Tunisians to its ranks.

This burgeoning operation in Libya shows how Islamic State is able to grow and adapt even as it is targeted by Russian, French and U.S.-led airstrikes in Syria as well as Kurdish and Iraqi ground assaults in Iraq.

On Thursday, nearly two weeks after Islamic State’s attacks on Paris, French President Franç ois Hollande and Italian Prime Minister Matteo Renzi met in the French capital where both said Europe must turn its attention to the militants’ rise in Libya. Mr. Renzi said Libya risks becoming the “next emergency” if it is not given priority.

In Libya, Islamic State has fended off challenges from government-aligned militias and called for recruits who have the technical know-how to put nearby oil facilities into operation. Libyan officials said they are worried it is only a matter of time before the radical fighters attempt to take over more oil fields and refineries near Sirte to boost their revenues—money that could fund attacks in the Middle East and Europe.

Sirte is a gateway to several major oil fields and refineries farther east on the same coast and Islamic State has targeted those installations in the past year.

“They have made their intentions clear,” said Ismail Shoukry, head of military intelligence for the region that includes Sirte. “They want to take their fight to Rome.”

Islamic State is benefiting from a conflict that has further weakened government control in Libya. For nearly a year, the U.S. and European powers have pointed to the Islamic State threat to press the rival governments to come to a power- sharing agreement. Despite a United Nations-brokered draft agreement for peace announced in October, neither side has taken steps to implement it.

A new U.N. envoy, Martin Kobler, was appointed this month to break the stalemate, part of efforts to find a political solution to counter the extremists’ expansion.

“We don’t have a real state. We have a fragmented government,” said Fathi Ali Bashaagha, a politician from the city of Misrata who participated in the U.N.-led negotiations. “Every day we delay on a political deal, it is a golden opportunity for Islamic State to grow.”

Since early 2014, two rival factions have ruled Libya, effectively dividing the country. In the east, an internationally recognized government based in the town of Tobruk has won the backing of regional powers Egypt and the United Arab Emirates. In the west, an Islamist-leaning government based in Tripoli has relied on Misrata fighting forces for political legitimacy.

Islamic State militants have successfully taken on and defeated myriad Libyan armed factions, including the powerful militias from Misrata which were the driving force behind the revolt that unseated longtime dictator Moammar Gadhafi in 2011. Misrata, 150 miles west of Sirte, has recently come under sporadic Islamic State attacks.

Members of Misrata’s militias, who are loosely under the control of the western government in Tripoli, say they lack the support to mount an offensive against Islamic State. Earlier this month, the Tripoli government forced the Misrata militias into a humiliating prisoner swap with Islamic State.

“There will be no meaningful action without a political agreement,” said Abdullah al-Najjar, a field commander with the Brigade 166, an elite Misrata militia that engaged in a protracted fight with Islamic State on the outskirts of Sirte earlier this year. “You have to know you’re going to war with a government that is going to back you.”

This month, the U.S. launched an airstrike against Islamic State in Libya, its first against the group outside of Syria and Iraq. Officials said they believe the strike killed one of the top deputies of Islamic State leader Abu Bakr al-Baghdadi. The deputy, Abu Nabil al-Anbari, had been sent to Libya last year to establish the group’s presence there.

In recent weeks, a flood of foreign recruits and their families have arrived in Sirte—another indication the group is becoming increasingly comfortable in its North African base, according to residents and activists from Sirte and Libyan military officials.

Islamic State has called on recruits to travel to Libya instead of trying to enter Syria, while commanders have repatriated Libyan fighters from Syria and Iraq, Libyan intelligence officials said.

“Sirte will be no less than Raqqa,” is a mantra often repeated by Islamic State leaders in the Libyan city during sermons and radio broadcasts, several residents and an activist from the city said. Raqqa is the group’s self-declared capital in Syria.

Like its mother organization in Syria, Islamic State has appointed foreign “emirs” in Sirte to administer its brutal brand of social control. Music, smoking and cellphone networks have been banned while women are only allowed to walk the streets in full cover. Morality police patrol in vehicles marked with Islamic State’s logo and courts administering Islamic law, or Shariah, as well as prisons have been set up.

With a population of about 700,000, Sirte was long known for being Gadhafi’s hometown and a stronghold of his supporters.

Soon after Libya’s uprising ended more than four decades of Gadhafi’s rule, he was killed in Sirte by fighters from Misrata.

Earlier this month, Islamic State reopened schools in the city, segregating students by gender and strictly enforcing an Islamic State approved curriculum. On Fridays, the traditional day of communal prayer, the group organizes public lectures and residents are often herded into public squares to witness executions and lashings of those who run afoul of the strict rules.

The seeds of Islamic State’s growth in Libya were planted after Gadhafi’s ouster. In the almost exclusively Sunni Muslim Libya, the Sunni extremist group exploited tribal and political rifts that lingered after the strongman’s death, particularly around Sirte.

By June, Brigade 166, one of western Libya’s strongest armed brigades, abandoned a monthslong battle with the militants on Sirte’s outskirts. In August, Islamic State cemented their grip on the city, bringing the last holdout district under their control, officials and residents said.

Islamic State crushed an armed uprising in August in three days. It was sparked by local residents angered over the group’s killing of a young cleric who opposed the radicals. Militants publicly crucified several people who participated in the revolt and confiscated homes.

The brutality moved the internationally recognized government in eastern Libya to plead for military intervention by Arab nations and a lifting of a U.N. arms embargo on Libya in effect since 2011. But the support never came.

Unlike in Syria, the group has struggled to provide basic services. Gas stations are dry and residents are expected to smuggle in their own fuel—as long as it is not confiscated by Islamic State.

Hospitals have been abandoned after Islamic State ordered male and female staffers be segregated. The ill must travels miles to other cities for treatment, a trip that is often accompanied by difficult questioning and searches at Islamic State checkpoints.

Despite the challenges, Islamic State has big plans for Sirte. A recent edition of their propaganda magazine, Dabiq, featured an interview with Abu Mughirah al-Qahtani, who was described as “the delegated leader” for Islamic State in Libya. He vowed to use Libya’s geographic position—and its oil reserves—to disrupt Europe’s security and economy.

About 85% of Libya’s crude oil production in 2014 went to Europe, with Italy being the largest recipient. About half its natural gas production is exported to Italy.

“The control of Islamic State over this region will lead to economic breakdowns,” the leader of the Libyan operation said, “especially for Italy and the rest of the European states.”