You are here: Home / Mediterranean / Daesh commander succumbs to wounds in Lebanon 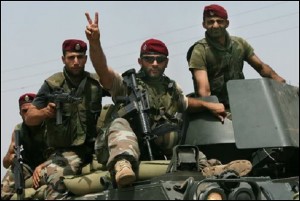 An ISIS [Daesh] commander Thursday succumbed to wounds which he had sustained during battles last week near Lebanon’s eastern border, a source told The Daily Star.

The source said that Khaled Mohammad al-Salem, who is known as Al-Hout (Arabic acronym for ‘the whale’), was smuggled into Lebanon after being critically wounded in battles near Lebanon’s border.

He was illegally admitted to a hospital in the western Bekaa for treatment.

Al-Qaeda-affiliate al-Nusra Front and ISIS had been engaged in fierce clashes on Arsal’s outskirts for a week over a territorial dispute which left several militants dead from each group. However, the fighting ended about two days ago following a truce.

On Wednesday, the Lebanese army killed six ISIS militants, including a commander, and arrested 16 others in the northeastern town of Arsal.

Lebanese troops, deployed around Arsal, have frequently clashed with ISIS and Nusra militants who briefly overran the town in August 2014 and captured a number of Lebanese soldiers and policemen, in the worst spillover of the Syria war into Lebanon.