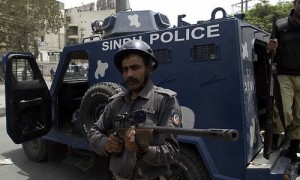 Police claimed to have killed a ‘commander’ of the militant Islamic State (IS) group, Kamran Gujjar, in an encounter in Karachi’s Manghopir area.

The suspect is said to have confessed to his involvement in target killings, grenade attacks and bank robberies.

According to a press release issued by Sindh police, District West police and CIA personnel, acting on a tip-off, launched a search operation in Ittehad Town area where the raiding party came under fire. One of the attackers and two policemen were severely injured during the ‘encounter’.

The attacker was identified as Kamran Aslam Gujjar, a ‘trained Daesh commander’ who had also worked for Al Qaeda in the subcontinent (AQIS)in the past and was carrying a bounty of Rs2.5 million on his head.

Kamran Gujjar was shifted to a hospital where he died during treatment.

Police claimed to have recovered a sub-machine gun, three hand grenades and explosive material from his possession.

According to the police statement, the suspect confessed his involvement in killing a number of people including DSP Abdul Fatah Sangri who was shot dead along with his driver head constable Nazeer Ahmed and security guard constable Farooq Ahmed in Karachi’s Malir district in May 2015.

Other high profile murders include MQM leader and KESC officer Farhan Khalil, whom the suspect allegedly confessed killing through a magnetic bomb in 2013.

Gujjar allegedly admitted to his involvement in a list of other criminal and terrorist activities, including grenade attacks and bank robberies, while he was being shifted to a hospital.

The suspect claimed that he had recently joined Daesh but could not carry out any major terrorist activity under the militant group’s banner, according to the police statement.

The four-page statement further said that that Safoora carnage suspect Tahir Hussain Minhas alias Sain had told police about Kamran Gujjar and his involvement in a number of subversive activities.