You are here: Home / Africa / Daesh claims attack on convoy in Nigeria which killed 40 troops 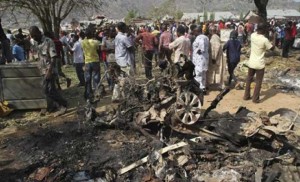 Islamic extremists said Tuesday they killed more than 40 troops from a multinational force in an attack on a convoy in northeast Nigeria — the fourth attack in three days following a lull as Nigeria’s homegrown insurgency confronts a leadership struggle.

Analysts are warning that the struggle could lead to more violent attacks that will kill more people in a seven-year-old Islamic uprising started by Boko Haram that has killed more than 20,000 people, forced 2.6 million from their homes and spread to neighbouring states.

Daesh’s West Africa Province annihilated “a convoy of the African Coalition Crusader forces” in the town of Malam Fatori, the SITE Intelligence Group reported, translating a Daesh, also known as ISIS or ISIL, communique posted on social media. There was no way to independently verify the claim and no word from Nigeria’s military late Tuesday night.

Eighteen people were killed Sunday and Monday when insurgents ambushed another convoy, gunned down Christians leaving a Sunday church service and beheaded a village head and his son.

No one has claimed responsibility for the earlier attacks.

Tuesday’s was the first Nigeria attack claimed by Daesh since August, when it named a new caliph in Nigeria and provoked a struggle with the longtime leader of Boko Haram, Abubakar Shekau.

Shekau pledged Boko Haram’s allegiance to Daesh in 2015, giving it its first sub-Saharan franchise. Daesh said it replaced Shekau in August, in a dispute that revolved around his indiscriminate killings of Muslims.

Many more Muslims than Christians have been killed in attacks targeting mosques, churches, marketplaces and schools.

Tuesday’s Daesh communique did not say when the convoy was attacked but claimed it “resulted in killing more than forty and wounding dozens” of troops from Nigeria and neighbouring countries. The multinational force is also battling Nigeria’s homegrown Islamic insurgents who have spread their extremist uprising to Chad, Cameroon and Niger.

Analysts from IHS Jane’s Terrorism and Insurgency Centre warned the recent lull and drop in fatalities likely will be followed by increased cross-border attacks.

In the leadership struggle, Shekau has reverted to the old name for his group, Jama’atu Ahlis Sunna Lidda’awati wal-Jihad, meaning “People Committed to the Propagation of the Prophet’s Teachings and Jihad.” They are commonly called Boko Haram, a nickname that means “Western education is forbidden or evil.”