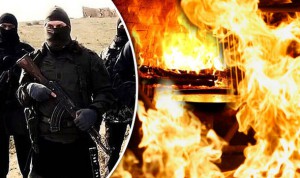 The militants of the Daesh terrorist group executed nine of their supporters for duck-out in the Iraqi city of Mosul, media reported on Tuesday.

“Daesh militants executed nine of their militants, who escaped from the confrontation with the security forces in Mosul, throwing them in the trenches full of black oil for burning with hands and feet tied,” a source in the security forces was quoted as saying by Al Sumaria TV channel.

On October 17, Iraqi Prime Minister Haider Abadi announced the start of a military operation to retake Mosul from Daesh, a jihadist group outlawed in a number of states including Russia.

According to reports, about 30,000 Iraqi soldiers and 4,000 Kurdish Peshmerga fighters are taking part in the operation, backed by airstrikes carried out by the US-led international coalition.