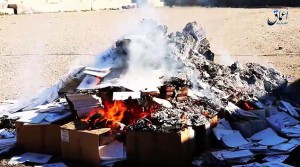 Daesh has released a video apparently showing its members lobbing hundreds of Christian books into fire in the northern Iraqi city of Mosul.

In the footage, Daesh militants throw pamphlets and manuscripts bearing crucifixes in a bonfire on the orders of the group’s so-called Diwan Al-Hisba, a police unit that metes out punishment to those refusing to conform to Daesh laws.

This is the latest instance of Daesh targeting items and places of cultural and religious significance, namely ancient sites, shrines, mosques, temples, monuments and manuscripts, in Syria and Iraq.

They have caused much irreparable damage in Syria’s ancient central city of Palmyra. The city, which is on the list of the United Nations cultural agency UNESCO’s list of World Heritage Sites, fell to the terrorists last May.

Last February, it destroyed around 10,000 books and more than 700 rare manuscripts when it blew up the main library in Mosul.

Iraqi forces are, meanwhile, preparing to retake the city, the largest under Daesh’s control.

The rise of the group, originally an al-Qaeda offshoot, in Iraq has been largely contributed to the chaos that ensued the United States 2003 invasion of the Arab country.

Earlier in March, General Lloyd Austin, the commander of US Central Command, recommended before the Senate Armed Services Committee that more American troops be provided to retake Mosul and Raqqah, Daesh’s stronghold in Syria.

American newspaper The Hill reported on Friday that planning is underway for US troopers to be moved closer to the frontline during the lead-up and the eventual battle to retake Mosul.

The plan envisages a 15-member US team joining Iraqi brigades during the preparatory stages and the showdown itself.