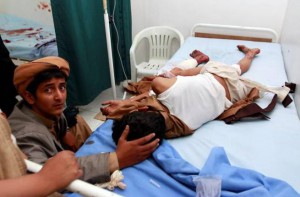 According to the ministry, scores of people also sustained injuries after the two blasts targeting the al-Moayed Mosque in the Yemeni capital.

Local media outlets also said that the second blast took place when first responders had arrived to attend to the victims of the first explosion.

The Daesh terrorist group has claimed responsibility for the bombings.

In a similar incident in June, a car bomb exploded near the Shia mosque of Qubat al-Mahdi Mosque in the Old City of Sanaa, killing three people and injuring seven others. The Daesh terrorist group also claimed that deadly bomb attack, saying it targeted the Houthis.

The bombing took place days after several blasts targeted the political office of the Houthi movement as well as three mosques in Sanaa, killing at least 31 people.

Earlier on Wednesday, two aid workers registered with the International Committee of the Red Cross (ICRC) were shot dead by gunmen in northern Yemen.

Rima Kamal, a Yemeni spokesman for the ICRC, said the workers were “brutally killed” in the northern province of Amran on their way back from Sa’ada to the capital, adding that the vehicle carrying them was “clearly” marked with the Red Cross emblem.

The terrorist attacks in Yemen come as Saudi Arabia continues to bomb the impoverished country.

Nearly 4,500 people have been killed in the Yemeni conflict, the World Health Organization said on August 11. Local Yemeni sources, however, say the fatality figure is much higher.