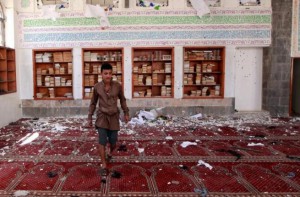 A bomb attack by the Daesh terrorists on a mosque in the northwest of the Yemeni capital, Sanaa, killed at least seven people.

At least seven others were injured in the explosion near the al-Nour mosque in the al-Nahda neighborhood of Sanaa on Tuesday, the Arabic al-Mayadeen news channel reported.

In June, similar blasts targeted the political office of the Houthi movement as well as three mosques in the capital. Over 30 people died.

Daesh, al-Qaeda-linked terrorist groups and have claimed similar deadly bomb attacks on mosques and religious centers in the past, saying the targets were Houthis.

The blast in the Yemeni capital comes as Saudi Arabia goes on with its military campaign against Yemen.