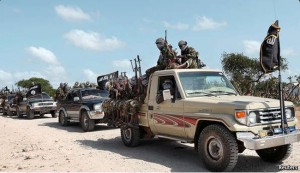 In an interview with German newspaper Das Bild German Defense Minister Ursula von der Leyen has said that there must be a plan to stabilize Libya or there is a risk of an alliance of terror groups like Daesh and Boko Haram that are operating in North Africa which raises the risk of an ‘Axis of Terror’.

Daesh terrorists in Libya are seeking to collaborate with Boko Haram terrorists elsewhere in Africa, which raises the risk of an ‘Axis of Terror’ that threatens the security of vast parts of the continent, Germany’s Defense Minister told German newspaper Das Bild on Monday; Sputnik reported.

“If that happens, it would result in an Axis of Terror that could destabilize large parts of Africa. The consequence would be new waves of refugees, which we cannot allow to happen,” Ursula von der Leyen said.

Von der Leyen stressed the proximity of Libya to Europe, and the importance of supporting a government in Libya that is capable of bringing order and cracking down on terrorist groups.

Libya “is the opposite coast of Europe – only separated by the Mediterranean,” she said.

“The most important thing is to stabilize the country and ensure that Libya gets a functioning government.”

“It (the government) will need rapid help to enforce law and order in this huge state, and at the same time fight against the Islamic terrorism that threatens Libya.”

“Germany will not be able to evade the responsibility of making a contribution (to the fight against terrorism in North Africa).”

On January 9, Der Spiegel reported that German and Italian troops could soon be sent to neighboring Tunisia to train Libyan security forces, after German Foreign Minister Frank Walter Steinmeier presented the idea at a meeting of foreign ministers and Libyan representatives in Rome which was held in December to discuss stabilization of the country.

“The mission could include 150-200 Bundeswehr soldiers, and be orientated (to train fighters) in the same way that the Kurds in northern Iraq have been trained. The operation is intended to stabilize Libya and prevent the terror organization ISIS (Daesh) from spreading further in the North African country;” Der Spiegel reported.