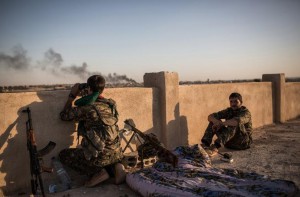 Daesh fighters attacked on Saturday the town of Tal Abyad, controlled by the Kurdish YPG militia, near the Turkish border, as well as the nearby town of Suluk, Reuters reported.

Redur Xelil, a YPG spokesperson told Reuters that the YPG and Syrian Kurdish security forces were able to “crush the attack and encircle the attackers.” Xelil said the fighters had been “eliminated” but gave no casualty figures.

Tal Abyad was captured by the YPG from Daesh control last year during an offensive backed by US-coalition airstrikes.

Xelil said some of the Daesh attackers had infiltrated Tal Abyad from the Turkish border to the north, underscoring allegations that Turkey has supported the group in order to weaken the Kurdish militias. Turkey has consistently denied those accusations.