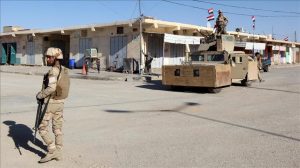 At least 15 Iraqi border guards, including two officers, were killed Friday morning in an attack by the Daesh terrorist group in Iraq’s western Anbar province, according to a military source like reported by aa.com.tr.

Al-Deleimi said that reinforcements — including army troops and border guards — had since been dispatched to the area to help repel the attack.

War-torn Iraq has suffered from a devastating security vacuum since June 2014, when Daesh overran vast swathes of territory, including the northern city of Mosul.

Last October, the Iraqi army — backed by a U.S.-led air coalition and local allies on the ground — launched a wide-ranging offensive aimed at recapturing Mosul, once considered Iraq’s second most populous city.