You are here: Home / MidEastGulf / Daesh among syrian refugees in camps near Jordan border 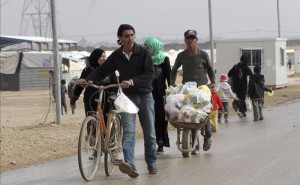 Supporters of Daesh militant group, who fled Daesh-occupied territories are among Syrian refugees in the camps near the Syrian-Jordanian border, Jordanian Minister of State for Media Affairs and Communications Mohammad Momani said.

On Sunday, Momani held a press conference regarding country’s policy toward accepting refugees. He was asked a question about the future of some 12,000 Syrian refugees from camps across the Syrian-Jordanian border.

“Jordan maintains its open door policy…[but] we do have security concerns, and this group specifically came from the far northeast of Syria, areas that are controlled by Daesh,” Momani said on Sunday, as quoted by The Jordan Times newspaper, adding that there were Daesh supporters and even members of the group among the refugees.

He added that Jordan took the issue of its security very seriously.

Syria has been engulfed in a civil war since 2011, with forces loyal to Syrian President Bashar Assad fighting against opposition factions and extremist groups such as the Daesh, which is prohibited by many countries, including Russia and the United States.

The internal conflict have already made more than 4,6 million refugees flee Syria to neighbouring countries, including more than 630,000 of them to Jordan, according to UN data.