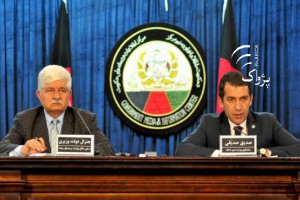 Spokesman of Ministry of Interior (MoI) has said that foreign forces’ airstrikes in close coordination with Afghan security forces have proved effective.

Sediq Seddiqi told a press conference that the fast-emerging Daesh group was a major threat to the security of the country, region and the world.

He said the world should join hands to fight the common menace. He said that precise airstrikes by NATO pounding militants’ positions in coordination with Afghan forces were effective.

“Such strikes sabotage gathering of enemy and air assault caused more damage to the enemy. Until our own air force gets these qualities we need foreign troops’ air support,” Seddiqi continued.

According to Seddiqi, the drone strikes in Achin district of Nangarhar province have taken place in coordination with Afghan forces that inflicted heavy damage on Daesh group. Fifty members of the group, he added, had been killed in the strikes on Monday night.

Dawlat Waziri, deputy spokesman of Ministry of Defence, said: “Daesh or any other terrorist group is Afghans enemy and we will sternly fight them.”

Currently, he said, seven operations were ongoing in eight provinces where heavy casualties have been inflicted on insurgents.