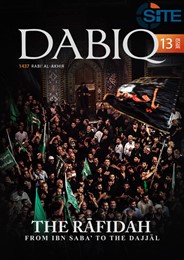 The new issue of the glossy English-language magazine produced by the Islamic State in Iraq and Syria (ISIS) includes lengthy praise of the couple who killed 14 people in San Bernardino, Calif., late last year.

The two killers “proved that they were ready to sacrifice what was dearest to them for the sake of responding to Allah,” the magazine, Dabiq, cheers in its foreword.

The magazine also makes reference to the “blessed attacks” in Paris in November, which killed 130 people, and confirms the death of “Jihadi John,” the British citizen who became notorious for videos showing him executing ISIS captives.

The latest issue of Dabiq, which was released on Tuesday, did not add any new details to suggest that the San Bernardino shooting was directed by ISIS’s core leadership. Officials in the U.S. have said that the massacre instead seems to have been inspired by jihadists such as ISIS, but that the shooters — Syred Rizwan Farook and Tasfeen Malik — carried it out without coordination from an outside group.

However, the magazine does praise their brutal slayings, which it hoped would “awaken more Muslims in America, Europe, and Australia.”

The Dabiq article neglects to mention Emwazi’s role as an executioner and propaganda tool for ISIS. Instead, it praises his “affection” for orphans of extremists killed while waging jihad, and claims that Emwazi had been questioned by Britain’s MI-5 intelligence before departing for ISIS’s self-proclaimed caliphate.

He was killed in a U.S. drone strike in November, the magazine confirmed.

On one page of the 56-page magazine, the nine attackers in Paris are superimposed over a photo of the city.

“Let Paris be a lesson for those nations that wish to take heed,” it warned.

ISIS has a significant propaganda machine, which it has used to great effect in recruiting extremists from all over the globe to join its ranks.

The edition of Dabiq released on Tuesday is the group’s 13th.