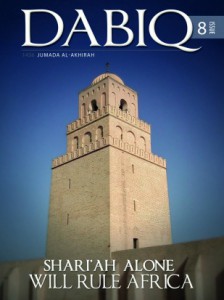 The ISIS terror group has devoted the cover of its official propaganda magazine Dabiq to its ambitions in Africa — Tunisia in particular, as the photo of Tunis’ Great Mosque of Kairouan suggests.

Dabiq is the official online magazine of ISIS, used for propaganda and recruitment. It was first published in July 2014 in a number of different languages, including English.