You are here: Home / Analysis / Dabiq: Doomsday and death for Daesh? 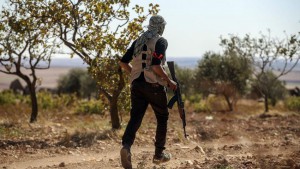 For more than a week, Syrian rebel forces have steadily advanced on a small town held by the Islamic State group in the Aleppo countryside.

Militarily, the northern Syrian settlement of Dabiq is insignificant, but its fall could seriously dent morale among militants already bruising from a string of defeats.

The Turkish-supported Syrian rebel fighters are tightening their grip around a large pocket of land jutting out from the rump of IS’ “caliphate”.

The new Turkish-backed offensive against the jihadi force – known as Operation Euphrates Shield – has pushed IS fighters to the northern flank of a peninsular of militant land.

A final offensive on Dabiq looks set to cut off the remaining fighters who don’t escape south.

Although escape might still be possible, many IS fighters will likely remain in Dabiq and fight what looks like a pointless battle.

The town is said to be the site of the apocalypse; history’s final battle between Muslim and “Roman” Christian warriors – a battle which will usher in judgement day.

This belief comes from a Hadith – or saying – attributed to the Prophet Mohammed, in which he mentions Dabiq, a seemingly unimportant town, by name.

For many in IS, the Syrian Muslim rebels poised to attack Dabiq are an incarnation of the “Christians” in the story.

The fact that they are backed by “Rum” – as Turkey is known by many Salafis – and supported by the West, also fits their narrative.

IS went to great efforts – and lost many men – to take Dabiq from rebel fighters in 2014. It was hoped its capture might herald the doomsday scenario portrayed in the Hadith.

While many other IS-held towns in Syria have fallen to rebels without much of a fight during a recent push, Dabiq has not been viewed as “expendable”. Fighters are expected to put up a vigorous defence of the town, likely fighting to the death.

Rebel leaders seem unsure how many militants are holed up in the town, but know it will be a difficult battle.

“Soldiers are more careful in the offensive on Dabiq since it has important value for [IS],” said Abu al-Farouq, leader of Failaq al-Sham in northern Syria.

“We have been preparing for this since the start of the Operation Euphrates Shield, and the deeper we go, the more brutal the resistance.”

The rebel group is readying for the offensive with six other rebel divisions who are camped out in the grasslands around Dabiq.

IS in turn is also preparing, bringing in militants to defend the town – and most likely booby-trapping buildings.

Most of the foreign fighters in the area – many of whom initially likely fell for the allure of the Dabiq myth – have given up the fight and fled, the rebel group’s intelligence said.

Meanwhile, a number of civilians remain trapped in the town, and Farouq said they would let them flee before the assault begins in earnest.

“Dabiq is of symbolic value to Daesh [IS] and the place they tried their best to spread poison to kids and their followers,” Farouq said.

If Dabiq falls, Farouq believes it will spell doomsday for the jihadist group, heralding its eventual collapse.

“With its fall they will simply realise they were stupid [to believe the Dabiq myth] and I’m sure the collapse will affect them in all the surrounding areas.”

An immediate collapse of IS looks far from assured, but the fall of Dabiq makes it a fitting time to look at the allure of the group.

Dabiq has become something of a Mecca for disenfranchised Muslims in Europe over the past two years.

“If you look at IS propaganda in terms of style, it seeks to attract young Muslims who have been exposed to movies and video games… they’ve tried to appeal to the westernisation and alienation that many Muslims from the West feel,” said Sam Hamad, a writer on Middle East affairs.

Among the propaganda tools are grisly beheading videos, the masterfully crafted The Clanging of Swords film series, and English-language e-magazine, Dabiq – which recently had a name change, perhaps in anticipation of its namesake’s fall.

The gore and apocalyptic imagery used in the Dabiq magazine was likely designed to appeal to radically minded, angry, sidelined Muslim youth in the West, rather than more orthodox-minded Salafis elsewhere.

“Dabiq serves as fantastic propaganda for the group – it’s Lord of the Rings and  videogame style graphics.”
Hamad said that the hadith of Abu Hurayrah foretelling the battle of Dabiq is one that is more entwined in local Sunni beliefs than the more conservative interpretations of Salafism popular in Saudi Arabia and other parts of the Muslim world.

“Daesh [IS] represents a very odd distinction within Salafi-jihadism, more attuned to the ‘folk Islam’ of Syria and Iraq. You can see this difference in the class status of the leadership,” said Hamad.

Other Salafi-jihadi groups in Syria – including al-Qaeda – have paid little interest in Dabiq.

“It is unlike the austere, clinical Salafi-jihadism of al-Qaeda – and of course, its cousin in Saudi-Wahhabism, which has every interest in maintaining order,” Hamad wrote.

“Daesh [IS] embodies the chaos of Syria in a very direct manner… they espouse an apocalyptic vision that sinisterly mirrors the crumbling of an order during the revolutionary war and their will to build a ‘caliphate’ within this chaos.”

That is why even if Dabiq – and eventually the “Caliphate” falls – the ideology of the group will continue so long as war goes on.

“It would still exist without genuine change that birthed [IS] and it would simply regroup,” said Hamad.

“As with all apocalyptic cults it will probably become part of mythology and that the ‘mujahideen’ will have to come and fight the ‘crusaders’ and take the city back.