You are here: Home / Europe / Czechs to send more troops to Afghan mission 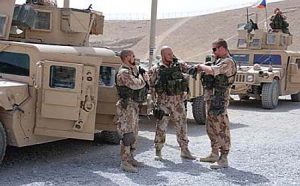 The Czech Republic is likely to meet the demand for an increase in the number of troops deployed in Afghanistan that the United States presented to its allies, Czech Defence Minister Martin Stropnicky told journalists after a meeting with his counterparts from NATO countries, like reported by praguemonitor.com

“We consider it important and we want to meet it,” he said about the U.S. demand concerning the Resolute Support advise and assist mission.

A possible increase by several dozen of soldiers would have to be approved by both houses of Czech parliament, Stropnicky said.

Up to 250 Czech troops are staying in Afghanistan, including a medical team, pilot instructors and a patrolling unit at Bagram air base.

Stropnicky said the increase would not mean that Czech troops would be assigned some very different, new tasks.

The NATO defence ministers are to discuss the Afghan mission on Thursday.

On Tuesday, NATO Secretary General Jens Stoltenberg said approximately 3,000 more troops are to be added to the mission. Half of the number are to be American soldiers.

The planned increase does not mean a return to combat operations, Stoltenberg said.

Fighting with Taliban insurgents has been primarily led by about 300,000 Afghan police and troops since 2014. NATO helps train the Afghan armed forces and cover their costs.

Stoltenberg said the training should focus on Afghan special forces and air forces that may play the decisive role in the country now.