You are here: Home / Africa / Czechs may send troops to Mali, Golan Heights 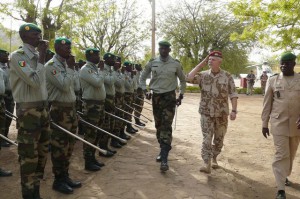 The Senate approved the mission earlier. The deployment of the soldiers till the end of next year will cost 182 million crowns.

The Czech military is already in Mali under the auspices of a EU mission. It helps train Malian soldiers and protects the mission command in Bamako.

With the new mandate, up to 25 members of a special forces unit, commanded by General Moravec, may be sent to the north of the country in which fights with Islamic militants are taking place.

The Czech soldiers will cooperate with the Dutch troops within the MINUSMA. The Czech military also wants to send up to five of its officers to the UNDOF mission at the Golan Heights.

The vote on the mission was dramatic. Zbynek Stanjura, a deputy for the opposition Civic Democratic Party (ODS), challenged the sense of the Golan mission.

Stanjura said the reasons for it were weak and the government only agreed with it in order to comply with President Milos Zeman, who is a proponent of the idea.

However, the mission was only supported by 89 deputies in the first vote in the 200-member Chamber of Deputies.

Then the vote was disputed by Frantisek Laudat (TOP 09 and STAN) and the required 101 votes were cast for the motion.