You are here: Home / Europe / Czech Republic to donate weapons to Jordan, Iraq 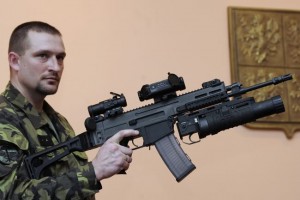 6,500 assault rifles and 7 million rounds of ammunition will be transported by the US to Iraq for use by Iraqi and Kurdish forces there.

The Czech Republic has previously sent tons of ammunition and hand grenades to Iraq.