You are here: Home / Europe / Czech military to be involved in Afghanistan after 2016 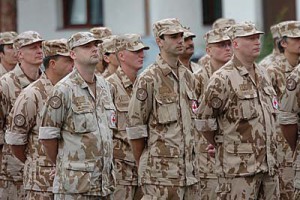 The Czech military plans to be involved in Afghanistan even after 2016 when U.S. forces are to end their mission, Czech Prime Minister Bohuslav Sobotka told reporters after a meeting with NATO Secretary General Jens Stoltenberg Wednesday.

The U.S. military announced it would withdraw from Afghanistan as from the end of 2016. However, the United States is yet to lead political talks about with Afghani representatives about its further involvement in the country.

The Czech military mission in Afghanistan has been approved by the end of 2016.

At the beginning of September, 281 Czech soldiers served in Afghanistan most of whom were in charge of protecting the Bagram allied air base.

In terms of the number of troops, he Czech Republic is one of the ten countries that contribute to the international operation in Afghanistan the most.

Sobotka also pointed out at the press conference that the Czech military’s budget would increase again after several years, which would help improve its capabilities and capacities.

Next year, the defence budget should rise to 47.5 billion crowns, compared to less than 44 billion this year.

The Czech Republic is a firm and resolute NATO member, Stoltenberg said.

He praised the Czech Republic for having been able to cope with the financial crisis, which enabled it to increase investments in defence, he added.

Stoltenberg said defence budgets were being cut in the world along with the decreasing tension after the end of the Cold War.

However, now the tension is rising and defence budgets must be raised, too, he said.

Stoltenberg also thanked the Czech military for having sent former chief of staff to the NATO Military Committee’s helm.