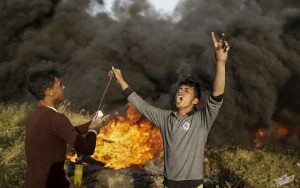 In a rare European expression of support for Israeli actions on the Gaza border, the Czech Republic’s top diplomat on Thursday said Hamas alone was to blame for the recent flareup of violence there, like reported by toi.com.

In a statement entitled “Gaza — Telling things as they really are,” Foreign Minister Martin Stropnický also posited that deadly riots on May 14 had nothing to do with the relocation of the US embassy from Tel Aviv to Jerusalem on that day.

“The fact is that Hamas, which is also recognized by the European Union as a terrorist organization and which still does not recognize Israel, is the only true ruler of the Gaza Strip, and as such is fully responsible for the form and objectives of the violent actions that have occurred on the border between Israel and Gaza in recent weeks,” he said.

The results of the weekly riots, which started last month and during which Israeli troops killed more than 100 Palestinians, most of them members of Hamas, was undeniably “tragic,” his statement read.

“We have unequivocally expressed our concern and regret over the loss of human lives,” he said. “In this context, however, it must be stressed that this concern is not only about the victims of the ongoing violence, but also about its causes, including who initiated it.”

“Minister Stropnicky spoke the truth and I commend him for that,” Israel’s ambassador in Prague, Daniel Meron, told The Times of Israel. “His remarks reflect the close relations between our two countries, Israel and the Czech Republic, that are based on historic ties, trust, support and common values.”

Many capitals, even in Europe, appeared to have accepted the Palestinian narrative, which described the so-called March of Return as a largely peaceful protest against Israel that was met with overwhelming, disproportionate lethal force by the Israel Defense Forces.

Israel, on the other hand, argues that the protests were really a military campaign by the Hamas terror group, which regularly calls for the destruction of the Jewish state.

Israeli officials said that Hamas was trying to get mobs of Gazans through the fence, including its own gunmen, potentially to carry out attacks inside Israel, and that the IDF’s primary obligation was to ensure that did not happen.

During weekly riots that began on March 30, most of the demonstrators kept away from the security fence, staying in tents a few hundred meters back, but there were also thousands who approach the border, hurling rocks and Molotov cocktails at Israeli soldiers on the other side or damaging the security fences and trying to break through them, the army says. Meanwhile, kites laden with containers of burning fuel were also flown into Israel, setting fire to hundreds of dunams of farmland and fields.

In response, Israeli forces used tear gas, rubber bullets and live rounds, which were aimed at the legs unless there was a direct, immediate threat to life, in which case shots were aimed at the torso, the military says. The army also maintains that snipers adhered to strict rules of engagement and required approval from a commander in order to shoot.

The UN Human Rights Council on Friday voted to establish an investigation into the events at the Gaza border, with 29 member states in favor, two against and 14 countries abstaining. Australia and the US were the two countries to oppose the decision. The Czech Republic is not currently a member of the council.

In his lengthy statement, Stropnický said that the demonstrators were protesting against the abysmal living conditions in Gaza, which were caused by Hamas, the ruler of the coastal strip since 2007.

Furthermore, protest organizers engaged in a number of “provocative actions that no state in the world could accept, including those that so vehemently protest against Israel’s response,” he said.

He listed “the persistent effort of the attackers to break the border fence and to enter Israel,” which can be “considered an act of terrorism,” according to Stropnický. “Similarly, other activities such as the burning of tires and setting ablaze fields around Gaza cannot be ignored.”

Stropnický also mentioned that Gazans burned the Kerem Shalom border crossing, through which residents of the Strip receive humanitarian aid, and that Hamas encourages teenagers to protests at the border “so that the world can accuse Israel of killing children.”

It all clearly showed that “Hamas does not care about its own people or to improve living conditions in the territory it controlled,” but mainly seeks to strengthen its own standing by attracting world attention. Such behavior, Stropnický posited, does not contribute to efforts to solve the Israeli-Palestinian conflict. “Things should be said as they really are,” he said.

Stropnický also argued that the there was no “causal relationship” between the move of the US embassy to Jerusalem’s Arnona neighborhood and the violence at the Gaza border.

“The Middle East conflict has been at varying levels for many years. The relocation of the US embassy was thus only used by the terrorist organization Hamas… to exacerbate even further the events it had organized long before,” he said.

On May 15 — the day after the most intense riots — the Czech Foreign Ministry had issued a brief statement that expressed concern “with the escalation of violence in Gaza which resulted in dozens of victims” and called “on all parties to exercise restraint and to adopt effective measures to prevent further loss of lives.”

Last month, Czech President Miloš Zeman announced the beginning of a three-staged process that will move the country’s diplomatic missions from Tel Aviv to Jerusalem, though it remains unclear if and when Prague will actually open an embassy in the holy city.

Acting Czech Prime Minister Andrej Babis is opposed to a full-fledged relocation of the embassy, saying he does not want to break with EU policy.

“According to usual diplomatic practice, States have their embassies in the capitals of the receiving States,” the Foreign Ministry in Prague said at the time, announcing the opening of a honorary consulate in May and a new Czech Center by the end of this year in West Jerusalem.

“This step in no way prejudges the final agreement concerning Jerusalem,” the statement continues. “The Czech Republic fully respects common policy of the European Union, which considers Jerusalem as the future capital of both the State of Israel and the future State of Palestine.”