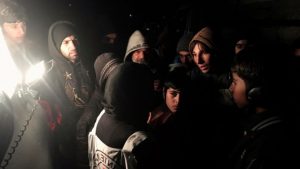 An intense information war being waged alongside armed hostilities in Syria is affecting efforts to help victims of the conflict, a senior humanitarian official says, according to theage.com.au.

Pawel Krzysiek, the spokesman for the International Committee of the Red Cross (ICRC) in Syria, says there is an atmosphere of “information chaos” as adversaries spread misinformation to discredit one another using social media and other digital channels.

“This war is being conducted very heavily in cyberspace – the regular armed groups also have cyber armies,” he said. “There are multiple sources pushing their own agendas.”

Krzysiek, an Arab-speaker who has been based in Syria since 2015, said Syria’s cyber-combatants regularly “hack each other” and constantly “troll the news” in a bid to counter information disseminated by their opponents.

The result is a stream of fake news that makes it difficult to get credible information about what is really happening within Syria.

“There is a proliferation of militias and armed groups controlling places – it is really chaotic and this is all reflected in the media sphere,” he said.

The misinformation has an effect on life-saving humanitarian operations in Syria.

“Today with citizen journalists your convoys are broadcast right away in real time … people are there on the check points filming you. All they need is a smartphone.”

Aid agencies have no control over how this type of information is portrayed by those broadcasting the images.

Krzysiek said this makes it more difficult for humanitarian organisations to give local people reliable information about the purpose of their operations.

“This is a big challenge today,” he said. “The risks are very high.”

There was international condemnation for the bombing of a 31-truck United Nations convoy carrying food, medicines and supplies bound for rebel-held areas of Syria’s western Aleppo Province in September last year.

A Syrian Arab Red Crescent worker was among 20 people killed in the attack.

“The Syrian crisis is absolutely unprecedented in terms of how many humanitarian workers have died while on duty,” Krzysiek said.

Pawel Krzysiek has crossed the frontlines in Syria many times, including in the besieged town of Madaya when aid convoys made it through to starving people in early 2016.

He gave the keynote address about the media’s portrayal of the Syrian conflict at the Australian Red Cross International Humanitarian Law and Journalism Symposium at Sydney University on Thursday November 2.

Mr Krzysiek said the dangerous conditions in Syria coupled with the challenges of verifying sources had made it difficult for journalists working for mainstream media organisations to accurately report events in Syria.

“It is a very tough game for the journalists covering the Syria conflict today,” he said.

The Red Cross has often played the role of a “humanitarian news agency” because of the way it has been able to verify facts for reporters, he said.