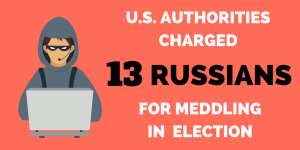 Thirteen Russian citizens have been criminally charged in the United States for conspiring to “sow discord in the U.S. political system,” including the 2016 presidential election, like reported by euvsdisinfo.eu.

Three Russian companies were also indicted by a federal grand jury. One of them is the infamous Internet Research Agency, a troll factory based in St. Petersburg.

According to the 37-page indictment, the defendants created false U.S. profiles and stole the identities of American citizens on social media to spread divisive messages, buy advertisements, and organise political rallies.

One of the defendants is Yevgeny Prigozhin, a Russian businessman close to the Kremlin and believed to be behind Russia’s internet troll factories. Nicknamed “Putin’s chef,” Prigozhin once ran President Vladimir Putin’s favourite restaurant in St Petersburg before being awarded state catering contracts worth billions of euros. He has also been linked to the Wagner Group, a Kremlin-tied private military contractor said to be operating in Syria, and was included on a U.S. sanctions list in 2017.