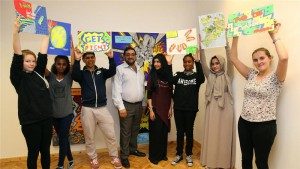 Social media has provided a powerful promotional tool for armed groups in recent years, but a UK-based charity is fighting back with an online campaign launched by the type of young people targeted for such recruitment.

The Active Change Foundation has created a new hashtag – #MessagetoISIS – to encourage opposition to the activities of the Islamic State of Iraq and the Levant (ISIL) group, following the success of its #NotInMyName initiative.

“No longer can we stand by, letting these animals hijack our faith. It is time for all of us to speak out and show them that they will be defeated,” the group’s founder, Hanif Qadir, told Al Jazeera at a workshop where participants made artwork challenging ISIL’s actions.

“This event was all about empowering young people to take a stand against extremism through the creative medium of art,” Qadir said.

“The work produced by the participants and their engagement shows [that] young people welcome an outlet to speak out against ISIS, who prohibit and destroy any form of individual expression.”

The Active Change Foundation says it is a myth that ISIL has anything to do with Islam, and it is trying to create better interfaith understanding with projects with a global outreach.

It wants people around the world to condemn ISIL’s actions – which include the killing of civilians, enslavement of war prisoners, and destruction of antiquities in places such as Palmyra, the UNESCO world heritage site in Syria.

Twitter has been working with the US’ FBI to combat pro-ISIL accounts, which aim to promote the cause of a new caliphate and lure recruits. Active Change Foundation says it is hoping to show that ISIL does not represent the vast majority of Muslims.

Its London workshop was run by artist Farah Bhoyroo, who unveiled a specially commissioned piece for the #MessageToISIS campaign.

Participants – aged 16 to 25 from a variety of religions and backgrounds – were then encouraged to draw on their own experiences and create artwork and messages to share via social media.

They produced an eclectic mix of pop art, selfies and videos with messages, such as: “Not only are you not Islamic, you’re not human”, and “Killing one person is like killing the whole of humanity”.

“Speaking out against oppression and standing up for what we believe in is something I hold very close to my heart,” Bhoyroo, 28, told Al Jazeera.

“I truly believe that we need to encourage and educate the younger generation to speak up against anything they are not happy with,” she said.

“Muslims are being seen in a negative light and being held accountable for the actions of terrorists, but this campaign shows the world that we are all the victims of their crimes and that we condemn their being. ISIL are not Islamic, and this campaign isn’t about one religion – but a way for all to stand up against the suffering and speak out against the actions of extremists.”
ISIL’s insurgencies in the Middle East have consequences for Muslims all over the world, the Active Change Foundation says.

The number of hate crimes against Muslims in the UK has risen by 70 percent in the past year, according to police statistics, coinciding with ISIL’s increasingly publicised atrocities.

The figures for 12 months up to August showed 816 Islamophobic crimes, compared with 478 the previous year. Tell MAMA, an organisation that monitors such attacks, claimed women were the primary targets.

“I believe they are following the wrong ideology and their actions are truly incorrect as they are causing harm to humanity,” said Ummar Ibrahim, a 20-year-old from Walthamstow, East London, who took part in the workshop.

Ibrahim’s #MessageToISIS was: “Get It Right”.

“Islam means peace, so they should stop blaming Islam,” he said.