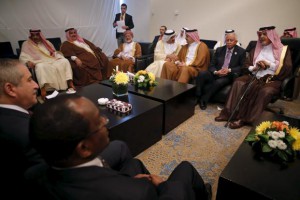 The heads of Arab League countries meeting in Egypt have agreed to create a joint Arab military force.

The League has been meeting in Sharm el-Sheikh amid a crisis in Yemen, but it is unclear yet whether the force would be deployed there.

A Saudi-led coalition has been carrying out air strikes in Yemen for five days.

The strikes are in support of President Abdrabbuh Mansour Hadi, who has fled amid gains by Shia Houthi rebels who the Saudis say are backed by Iran.

Egyptian President Abdel Fattah al-Sisi said: “The Arab leaders have decided to agree on the principle of a joint Arab military force.”

The Arab League will work with military representatives of its members to organise what has been described as a voluntary force.

Analysts say it is unlikely all 22 members will join the proposed force.

Arab League chief Nabil al-Arabi added that the Saudi-led offensive against the Houthis would “continue until the militia withdraws and surrenders its weapons”.