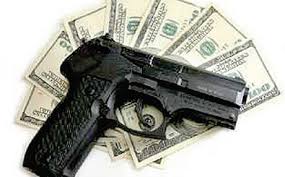 Within the last few years, terrorism has emerged as a major trending topic in the world. Terrorism is recognized closely with the definition of violent extremism, which refers to people’s actions in using violence to achieve ideological, religious or political goals.

By spreading their psychology of threat, terrorists can intimidate a civilian population or even cause mass destruction. It has become a core agenda item in international security policy-making because of its significant threat to world peace.

To respond to the spread of violent operations, we must fight “The Global War on Terror” vigorously. Terrorism is not about any particular ideology or religion, but refers to the specific terminology regarded as the world’s global enemy. The war on terror is defined as an asymmetric struggle because at times we face the enemy in tangible and intangible forms.

Concerning war strategy, Carl von Clausewitz introduced the concept of a center of gravity in his classic work On War in 1832. He defined the center-of-gravity concept as the “hub of all power and movement, on which everything depends, the point which all our energies should be directed”.

Clausewitz observed centers of gravity as sources of moral and physical strength, power and resistance. Indeed, they could be intangible factors, capabilities, alliances or leadership. Each combatant has a distinctive center of gravity at the strategic level of war, providing the critical link combining strategy, operations and tactics. In this regard, a strategic center of gravity is a prominent entity that is fundamental to carrying on the fight.

As far as terrorism is concerned, it is essential to determine terrorism’s center of gravity before we arrange a strategy regarding the terrorism itself. For decades, John L. Haberkern and other international scholars have insisted that in order to successfully combat terrorism we must pursue a de-radicalization policy focusing on the way to counter radical ideology in the community.

This soft approach has made significant efforts in diminishing the diffusion of terrorist ideology. However, de-radicalization cannot prevent the expansion of terrorist networks that are very dynamic. Terrorism’s rapid development has revealed that ideology is a significant trigger for the movement but not the major hub of its power.

Based on my observation as a terrorist-financing researcher, money is at the core of terrorism. The International Convention for the Suppression of the Financing of Terrorism defined funding for terrorism purposes as assets of every kind, whether tangible or intangible, movable or immovable, however acquired and legal documents or instruments in any form, used to support operations and violence. Terrorists will always need money to fund their activities including training costs, accommodation, explosive and weapons purchases etc. They also need funding to support their propaganda in particular related to recruitment.

Shifting the focus of anti-terrorism strategy from the counter-ideology program to anti-terrorist financing is a crucial step to advance the campaign against terrorism. This framework transformation will result in the reinforcement of financial sector policies including prevention and supervision programs that restrict the fund-raising conduits of terrorists.

By implementing the new policy, we could also strengthen the law enforcement area in handling terrorism cases. The changing method underlines how investigators and relevant institutions monitor the terrorist money trail, before capturing perpetrators. Hence, we can identify the masterminds in terrorist networks.

In accordance with the anti-terrorist financing strategy, Indonesia has taken initial steps in establishing strategic measures to detect suspicious financial behavior. The government fully understands that the counter-ideology approach will not provide all the necessary results in combating terrorism. This is recognized as the terrorist network in Indonesia has continuously grown, albeit in a sporadic way, until now.

Various efforts have been made by Indonesia to combat terrorist financing through enactment of Law No. 9/2013 on the prevention and eradication of the financing of terrorist crime and the establishment of joint regulations involving the Foreign Ministry, the National Police, the Financial Intelligence Unit, National Counterterrorism Agency and the Supreme Court drafted in February 2015 regarding the freezing without delay of terrorist funds in accordance with UN Resolutions 1267 and 1373. These measures will benefit society in mapping out potential terrorist networks and their financing.

Given that terrorism is an extraordinary crime, Indonesia should also have a strong commitment to assisting the financial service providers and law enforcement sectors in preventing and combating terrorist financing simultaneously. Thus, strategic partnerships within neighboring countries concerning intelligence information exchange, joint investigations and multilateral dialogue are urgently required.

Therefore, in line with Clausewitz’s theory, decision makers must believe the concept that a blow to the enemy’s center of gravity will throw them off balance, causing their entire system or structure to collapse. To attack a terrorist network on target, its center of gravity needs to be identified. Money is the hub of all terrorist power and on which everything depends and toward which all of our energies should be directed.