You are here: Home / Senza categoria / Countering ISIL’s erasing of history and heritage 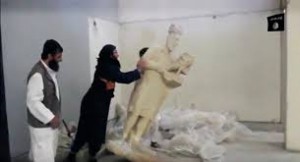 In addition to ISIL’s atrocities inflicted every day on the Iraqi and Syrian people living in communities the terrorist group has seized – the crucifixions, beheadings, sexual enslavement and violence, rape, and denial of every human right – ISIL is also engaged in other crimes, including its attempt to erase cultural heritage that does not conform to its narrow ideology.

ISIL’s latest reported cultural destruction target is the Arch of Triumph in the ancient Syrian city of Palmyra – a monument thought to be 2,000 years old. It is now added to the list of ISIL’s demolition of shrines or statues that predate the founding of Islam, like the Assyrian winged bulls in Nineveh, the historic lions in Raqqa, and the tomb of Jonah in Mosul.

What ISIL doesn’t destroy of Syria and Iraq’s ancient history and heritage, it sells, Deputy Secretary of State Antony Blinken noted recently at a symposium at the Metropolitan Museum of Art in New York City:

”These ancient coins, stone, glass, and mosaic fragments travel organized routes through black markets in the Middle East, Europe and the Persian Gulf. The profits return to line the pockets of these extremists – funding more savagery, more terror, and more devastation.”

It is for this reason the United States has developed Red Lists with the International Council of Museums to help law enforcement officials recognize looted objects; it’s why the U.S. has stepped up efforts through the Global Coalition to Counter ISIL to encourage greater action against the illicit trade; it’s why the United States works so closely with international law enforcement agencies in the U.S. and around the world; and it’s why the United States recently announced that it is offering, through the State Department’s Rewards for Justice Program, up to $5 million dollars for information leading to the significant disruption of the sale and/or the trade of antiquities, by, for, or on behalf of ISIL.

Calling the refusal to deal in conflict antiquities both a legal and moral obligation, Mr. Blinken said in the face of the urgent challenges of today, “it is critical that we hold…fast to the fabric of our humanity — to our gifts of reason and wisdom, our expressions of art and culture, and our universal values of civility freedom and dignity. These are exactly what ISIL seeks to destroy.”