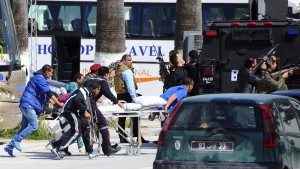 “Tunisia will take all appropriate measures to fight against terrorism and ensure the safety of its citizens and visitors,” he added in a speech to the European Parliament in Brussels.

The Premier stressed Tunisia’s determination to combat extremism and terrorism, particularly through a strategy to strengthen the operational capacity of internal security forces, the army and intelligence services.

Speaking to dozens of MEPs, Essid urged European Union member states to foster co-operation with Tunisia in several fields so as to complete the democratic transition process under the best conditions.

He underlined that the Libyan crisis has had a direct impact on the security situation in Tunisia, calling for a political settlement between parties in conflict in that country.

Essid said the attackers of the Bardo Museum were trained in Libya where they learnt how to handle weapons.

At the economic level, the PM said an international conference on financing development projects, particularly in disadvantaged regions, will be held at the end of 2015.

Several MEPs asked about the threats facing Tunisia’s young democracy, the situation in Libya, illegal immigration, the social movements staged in the mining basin, Tunisia-EU trade and freedom of press and expression.