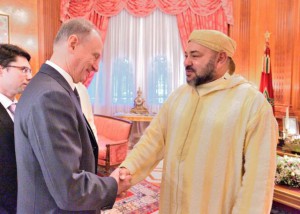 “King Mohammed VI received in the royal palace in Casablanca, the secretary of the Security Council of the Russian Federation Nikolai Patrushev, who is on a working visit to the kingdom,” the Maghreb Arab Press (MAP) said today in a statement.

During the meeting, the statement says, King Mohammed VI took the opportunity to extend a formal invitation to President Putin and expressed his commitment to strengthening security ties between both countries in the coming months.

The meeting also shed light on the power of online terror. “They exchanged experience on improving the counter-terrorism legal framework and countering threats in cyberspace,” the same source added. “Special attention was paid to thwarting the use of Internet technologies by terrorists and attempts to spread extremist dogma in cyberspace.”

During his time in Casablanca, Patrushev also held a meeting with Yassine Mansouri, the director of Morocco’s external intelligence agency (DGED), wherein they “discussed the situation in North Africa, the Sahara and Sahel region and the Middle East,” according to the Russian press service.

Russia is also an important economic ally, as nearly 15% of all agri-food exports go to the Eurasian country.