You are here: Home / Analysis / Counter-terrorism in the Sahel: can Task Force Takuba be a game changer for France? 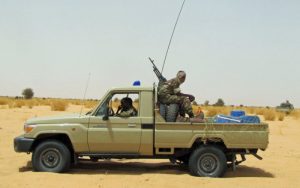 In 2021, Task Force Takuba, bringing together the special forces of 7 European countries to fight terrorism in the Sahel, will become fully operational with an initial mandate of 3 years, like reported by globalriskinsights.com. France, stuck in what looks like an unwinnable war despite the mobilisation of 5,100 troops as part of Operation Barkhane since 2014, has been advocating for a “Europeanisation” of the military intervention in the region for quite some time. While Takuba will enable more tactical wins against terrorist groups and enable France to break with its diplomatic and military isolation, it is unlikely to change the direction of the conflict. In this context, what is the future of operation Barkhane?

On the first anniversary of the Pau summit, France finds itself at a turning point in a deadly and unpopular military engagement in the Sahel. As Takuba starts to fully deploy, the future of France’s support to the countries of the G5 Sahel remains ambiguous. But one thing is clear: the fight against Islamist terrorism in the Sahel cannot be definitively won until these countries become their own security and stability providers, an unrealistic scenario in both the medium and even long term.

On 13 January 2020, the Pau summit hosted by French President Emmanuel Macron gathered the heads of states of the G5 Sahel (G5S – Mali, Burkina Faso, Niger, Chad and Mauritania). The objective was to strengthen military cooperation under operation Barkhane and pave the way for a more unified International Coalition for the Sahel. One year later, there has been no major breakthrough in the fight against terrorist groups proliferating in the region. In 2020, there were important tactical wins, with the neutralisation of terrorist cells and the killings of some terrorist leaders such as Al Qaeda in Islamic Maghreb’s (AQMI) chief Abdelmalek Droukdel in June. The optimistic “media buzz” surrounding such wins however only serves to hide what is in reality a rather pessimistic prospect of victory in a war already coined “France’s Afghanistan”, or “France’s African Forever War”. Despite a regular increase of French troops between 2014 and 2020 (including 500 more soldiers following the Pau Summit), France and the G5S have not achieved strategic wins in the region.

In fact, the security situation in the three-borders area (Burkina Faso, Mali and Niger), also known as the Liptako region, has instead continued to deteriorate. Conflict metrics show a spiralling of violence. Since 2016, terrorist attacks in this region have increased by 500%. A multitude of evolving terrorist groups are still active in the Sahel: Jama’at Nusrat al Islam wal Muslimeen (JNIM), linked to Al Qaeda in Islamic Maghreb (AQIM); Islamic State in the West Africa Province (ISWAP), a splinter of Boko Haram; and The Islamic State in the Greater Sahara (ISGS). Terrorists have also expanded their territorial presence in the south and the west of the region, exploiting the failure of the states accelerated by the pandemic to recruit new fighters. In such instances, recruits have been joining largely for financial gain and social status, rather than shared ideological beliefs with radical groups. Recent kidnappings linked to ISWAP in the Northwestern part of Nigeria also highlights the role of local banditry and its interplay with terror groups to further challenge the authority of failing states.

Operation Barkhane has been particularly costly, deadly and unpopular. 50 French soldiers have died in the Sahel since 2013 – not to mention the 200+ UN peacekeepers who have died in the same period. The level of support amongst French politicians and the French population is quite low: according to a recent poll, 51% of French people are against the intervention. Since none of the recent terror attacks in France seem to be connected to any terrorist group in the Sahel, the price to pay is politically hard to justify.

Barkhane has also been undermined by a lack of support for the foreign intervention by Sahelian peoples, where the high level of kinetic military activity and violations of human rights by regional armies are disenfranchising the local population. The somewhat inconsistent support from G5S top officials themselves is also problematic. While President Macron insisted in Pau that the time for ambiguity was over, a few days after massive protests against the French presence in Mali, members of the G5 Sahel have not shown a robust alignment with Paris over the past year. As early as February 2020, the Malian government considered starting negotiations with terrorist groups, a no-go for France, as it would contradict the strategic narrative of its military involvement in the region.

Militarily, the main change that Takuba will bring is a human and technological capacity to conduct more mobile and targeted elite-type operations against terrorist cells, especially in Mali, thanks to increased air-lift capabilities. This will enable France to redirect Barkhane geographically outside of Mali, where it has prioritised the fight against ISGS at the expense of other areas since the Pau Summit. It will also enable Barkhane’s forces to reallocate resources towards transferring military know-how to regional armies, a strategic dimension of the operation for which the results have been disappointing. Fundamentally, the G5S continues to depend on French troops to ensure the security of its territories and borders.

On top of improving operational capacities, Takuba can also play a more political role for France, whose presence remains contested. The long-awaited military assistance of other European countries will finally break France’s isolation in this conflict and justify what will realistically be its slow but sustained military disengagement. However, this political “discourse”, if it develops, would hide a very different reality. In the next few years, the Europeanisation of the military support to the Sahelian armies with Takuba will be very relative. Indeed, 300 of the 600 members of the Takuba come from the French Army, and these elite forces are placed under French command. In other words, France is set to remain the main and overwhelmed security provider.

Early January, Florence Parly, the French Minister of Defence, announced the reduction of the French presence to pre 2020 levels, with the repatriation of the 600 soldiers sent after the Pau Summit. A logical decision in the current political context, which is at odds with the calls of regional leaders, such as G5S’s Nigerian leader General Oumarou Namata Gazama, who stands against scaling down the French presence, even if Takuba grows.

One thing to watch in 2021 is how well Takuba will perform and to what extent the future of Barkhane will be intertwined with Tabuka’s performance. On the basis of Florence’s Parly comments on the fact that “by nature, [military] support is limited in time”, a likely scenario is the continuous reduction of French troops in the short-term, with the French military concentrating its efforts on the fight against ISGS and coordinating operation Takuba’s targeted interventions against other terror groups.

Regardless of the strategic choices that will be made by France or its European partners involved in Takuba, the security situation in the Sahel ultimately depends on the capacity of the states concerned to restore their authority. While security is a condition for stability, the societal roots of the violence cannot be simply eliminated by the use of force. As the chief of staff of French armed forces General Lecointre stated in November 2019: “We will never achieve a definitive victory” in the Sahel.