You are here: Home / MidEastGulf / Could Hezbollah be the salvation for Syrian Druze? 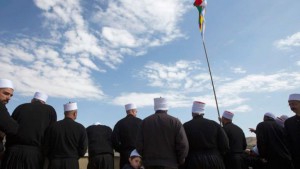 “Israel is not the solution to our situation in Syria,” Lebanese Druze leader Walid Jumblatt said at a special press conference last Saturday while rebel groups were advancing toward Druze Mountain in southern Syria.

This advance was made possible by the collapse of the Syrian army’s 52nd Division, which had been deployed in the Daraa region to protect the Druze.

The rebel advance into Druze areas has created a security and moral dilemma for Israel that requires immediate decisions.

In recent days, the Israeli government declared it does not intend to intervene militarily on behalf of the Druze in Syria, as this would be interpreted as an active involvement in the Syrian civil war for the first time since it broke out.

Furthermore, it appears the Syrian Druze themselves are not interested in receiving assistance from Israel, at least not an openly, as this would be seen as a betrayal of Syria’s interest and motivate both the Assad regime and rebel groups to massacre them.

Given these circumstances, Israel’s only way to help the Druze is with humanitarian aid. Recently, IDF Chief of Staff Lt. Gen. Gadi Eizenkot hinted at this when he said that the IDF would “do what is needed to prevent a massacre” of refugees on the Syrian side of the border in the Golan.

However, Israel’s capabilities are limited here as well. Effectively protecting the Syrian Druze community would require setting up refugee absorption areas inside Syrian territory, establishing buffer zones, coordinating international cooperation and working with other entities, such as Syrian rebel groups, with which Israel is not accustomed to operating with.

Militarily, it seems that the fighting between rebel groups and the Druze in the Druze Mountain region will not end soon. It is not at all certain the rebel groups will gain the upper hand, due to stubborn resistance from the Druze, who are fighting for their lives. The Druze community has been deeply planted in this region for a long time and has successfully survived various revolts and conquests over the years.

Moreover, unlike other cases in which rebel groups have been able to seize villages and Syrian military bases as a result of betrayal or by first gaining a foothold in the area, the rebels have made no headway in the Druze community. And it is very unlikely the Druze will betray other Druze. Therefore, the rebels will struggle to advance into the Druze villages and achieve victory.

Still, in the absence of military assistance from Israel, the Syrian Druze are likely to obtain such help from Hezbollah and Iran’s Revolutionary Guard, in addition to the backing they already receive from the Assad regime.

The rumors in Lebanon are that Talal Arslan, a Druze member of the Lebanese parliament, secretly met with Hezbollah leader Hassan Nasrallah to coordinate the reinforcement of Druze Mountain. This reinforces the claims of a deepening relationship between the Syrian Druze and Hezbollah.

The connection between the two seems natural given the fact that both are currently supporting and fighting for the Assad regime. However, over time, this could strengthen the terrorist elements near the Israel-Syria border in the Golan and bolster the organizational infrastructure Samir Kuntar worked so diligently to build up in recent years by recruiting Syrian Druze to the terrorist struggle against Israel.